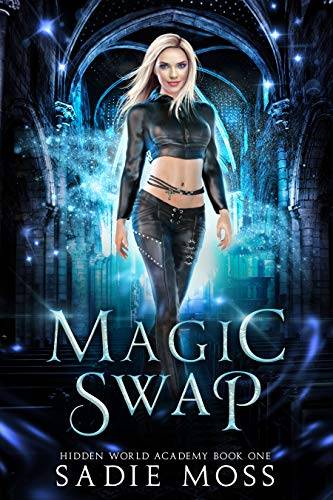 Mistaken identities, a human in a magical world, and three sexy warlocks. Sounds like the start of a joke, but nope...

After one too many kamikazes on my twenty-first birthday, I've made a few interesting discoveries.

First of all... magic is real.
Secondly... there's a whole supernatural dimension that exists parallel to ours.
Thirdly... I've somehow gotten stuck in that dimension.

There are about a billion things wrong with this picture, including the fact that I don't actually have any magic. Everyone here thinks I do though. They also think I'm a witch named Roxie, the star student at Radcliffe Magical Academy.

I don't know where the hell the real Roxie is, or how I'm supposed to get back home, but I'm determined to find out.

Unfortunately, I keep getting distracted by three hot-as-hell warlocks I can't seem to avoid. Cross, a snarky bad boy who pushes all my buttons, Theo, an incorrigible flirt with a devastating accent, and Kasian, a teacher's assistant who's totally off limits.

Even though I'm drawn to all three of them, I'm not sure I should trust them.

Because if anybody finds out I don't belong here...

Magic Swap is the first book in the Hidden World Academy series, a fast-burn reverse harem story about a sassy human who's out of her depth and the three men who fall in love with her.

"Plot is full of unexpected twists, the guys are hot, hot, hot, and Gabbi is an exceptional heroine!!!" ★★★★★

"Gabbi is the feisty heroine we all hope we would be if we get dropped in a fish out of water scenario like this. Her men are the imperfect heroes we want to champion us as we fight our own battles. I can't wait to see what happens in book 2!" ★★★★★

"This was an amazing book! I was in such a book slump before reading this, everything felt like it just didn't catch my interest, but I DEVOURED this! It's an interesting take on academy, and definitely took twists and turns that I did not expect." ★★★★★

"This book was so much more than expected! It's a breath of fresh air amidst the tangle of all the academy series out there. This is much different than any academy series I have read so far and I absolutely love it." ★★★★★
Folklore Mythology Occult Magic

Bailey And The Bad Boy

Business Breakthrough: Your Creative Value Blueprint to Get Paid What You're Worth