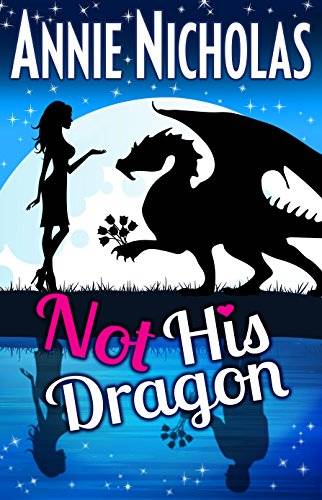 Not His Dragon is the hilarious first book in the paranormal rom-com Not This Series.Angie Weldon is as tough as her polished, dagger-sharp nails. As a backscratcher catering to the wild and whiskered, she’s had her share of shaggy suitors. But she’s not sure how to handle the brazen shifter who swears she too is a dragon.Eoin Grant hasn’t found a female of his kind in decades. But one sniff of Angie and he’s fallen hook, line, and scales in lust. Then again, so has just about every other hot-blooded fire-breather in town…Though Angie discounts Eoin’s crazy claims, she can’t ignore the sizzling chemistry she feels when she scrapes her fingers down his spine. And Eoin knows he must entice her true form out of hiding, or lose the stunning beauty to a swooping rival.Will Angie and Eoin play it cool, or expose themselves to the blaze of lust?If you like steamy attractions, fast-paced action, and snarky humor, then you’ll love Annie Nicholas’s hotter than hot romp.Buy Not His Dragon to fan love’s flames today!

START NOT THIS SERIES WITH THIS FREE KINDLE BOOK

READ THE ENTIRE NOT THIS SERIES
amazon.com/dp/B07F7SPQQH

Autism Goes to School : Book One of the School Daze Series

Women Finishing Well: Building a legacy of faith that lasts for generations