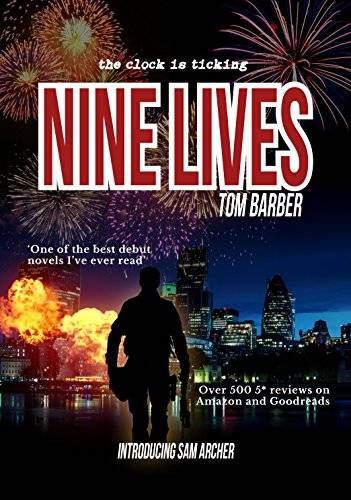 Praise for Nine Lives:
‘One of the best books I've read - certainly for a first novel’
‘One of the best thrillers in the recent past’
‘I’ve read a lot of books in the past two years since I owned a Kindle, but this was the most compulsive reading I have come across’
‘One of the best books I have read in this genre’
‘An impressive start to a great series. I've now read all 6 books, and it just gets better and better’
‘My new favourite in the genre'

It’s New Year’s Eve. A major terrorist cell is planning a series of attacks across London over the next forty-eight hours. The government has surveillance on the group, a man undercover, and prepare to move in, to take out the terrorists before they can strike. But they lose contact with their inside man. And the cell vanishes into thin air, dispersing into the streets, armed and intent on completing their assault on London. The best Counter-Terrorist teams in the country are told to take them down before it's too late.

The Armed Response Unit is one of these teams. Efficient and ruthless, the task force is ordered to locate the leader of the cell. As they hunt him down, they begin to realise that this is far bigger than any of them could ever have imagined. Bombings, rocket attacks, betrayal and a series of unexpected and shocking twists leave the ARU fighting to stay alive.

There's Archer, the youngest member of the team, keen to prove himself and justify his spot on the task force. His best friend, Chalky, who is forced to fight both the terrorists and his own demons. Porter, Deakins and Fox, tough and experienced men who’ve never dealt with anything of this magnitude. And Mac, their sergeant, who must make the quickest of decisions and lead his men against the invisible enemy.

As events unfold, other people are drawn into the danger. The Prime Minister, desperately trying to find a solution and protect the capital. A mysterious female Mossad agent, who appears out of nowhere and joins the fight against the cell. Two Special Agents from the DEA, one of whom was a member of the SEAL team that stormed Osama Bin Laden’s compound and who for some reason is struggling with the memory. And the vicious, powerful leader of a Middle Eastern drug cartel, who operates in the shadows and is somehow connected to the terrorists.

With crowds all over London celebrating the New Year, and with nine terrorists somewhere amongst them, the Armed Response Unit is faced with the most dangerous night of their lives. As the savage, shocking plans of the enemy are fully revealed, the ARU officers are faced with the ultimate question.
How many times can a man cheat Death before Death evens the score?
Suspense Suspense Action Fiction Action Thriller Fiction

Forever and Ever Boxed Set: Books 1-3