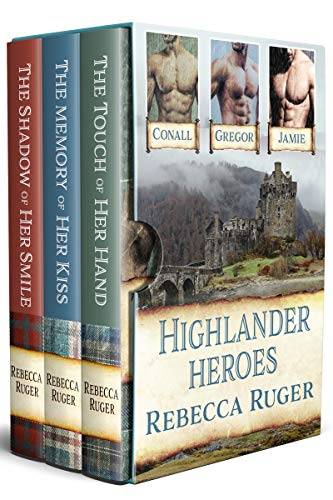 THE TOUCH OF HER HANDWhen Conall MacGregor kidnapped the daughter of his sworn enemy, he never imagined his own heart would be held captive.For more than a decade, while the First War of Scottish Independence rages, fierce warrior Conall MacGregor has dreamed of the revenge he will have against the man who robbed him of his family and home. To this end, he abducts the daughter of his enemy, hoping to force a marriage and reclaim what is rightfully his. He has no idea that the stubborn lass will turn his world upside-down, and that he will be the one held captive.Half-English Tess Munro has no plans to shame her father and people by wedding MacGregor the Murderer. Despite her tremendous fear and a regrettable liking of his kisses, she staunchly refuses to wed him. She tries often to escape, both Conall and the hateful people of Inesfree, who leave no question about their absolute distrust and dislike of the Munro prisoner.Soon, Conall’s reasons for stealing Tess grow more distant, and Tess’s desire to flee begins to fade, but a threat greater than their own pride will challenge the very fragile existence of their growing desire for each other.Conall MacGregor has conquered many enemies, but can he win the heart of one stubborn lass?
THE MEMORY OF HER KISSAnice Lindsay is a novice at Jardine abbey, whose true calling seems to be getting into trouble. Gregor Kincaid, known as The Fist of Scotland, is a fierce warrior and noble companion to William Wallace.Gravely wounded and separated from his army, Gregor stumbles upon the exquisite Anice, locked outside of the nunnery in the midst of one of her regular punishments. His decision to save her has more to do with her beguiling blue eyes than his need of assistance.Anice is only too happy to escape the discontent of Jardine. When the braw chief of the Kincaids rescues her and then promptly collapses from his wounds, she doesn’t think twice about secreting and nursing him until his army comes to collect him.En route to Stonehaven, the Kincaid fortress by the sea, Gregor struggles mightily against his growing desire for Anice while she innocently and happily surrenders to his kisses. Once safely arrived at Stonehaven, Anice learns the reason behind his resistance: he is betrothed to a woman of an enemy highland family, and the wedding must take place to put an end to years of violence.Highland intrigue blooms in the background of the great war for Scottish freedom. Setting aside his feelings for Anice in favor of peace in the Highlands, can Gregor live with his choice to put Anice out of his reach, out of his arms, and out of his heart?
THE SHADOW OF HER SMILEAda Moncriefe cannot stand by while her betrothed cruelly executes prisoners. She makes a daring plan to free the Scots warriors in the dungeon, only asking that the brave leader take her with him when they escape. Things go horribly wrong, and Ada pays a dear price for her sacrifice. Broken and scarred afterward, she lives a ghost-like existence, having no idea what her future holds.Jamie MacKenna is haunted by the fact that he was prevented from returning to save his men-at-arms and the lass who’d freed them. With greater fervor, he thrusts himself into the war for Scottish freedom alongside the valiant warrior, William Wallace.More than a year later, he stumbles upon Ada Moncriefe in the Scottish Highlands. His guilt induces him to offer her marriage, and despite the tormenting passion that rages between them, he vows never to love her.  Soon though, Ada begins to yearn for something more with her hardened warrior husband.As the sun sets on William Wallace’s fight for Scottish independence, Ada and Jamie must both learn to forgive and to open themselves to love.
Scottish Historical Romance Medieval Historical Romance

Sherlock Holmes and the Case of the Brash Blonde: a modern take on an old legend