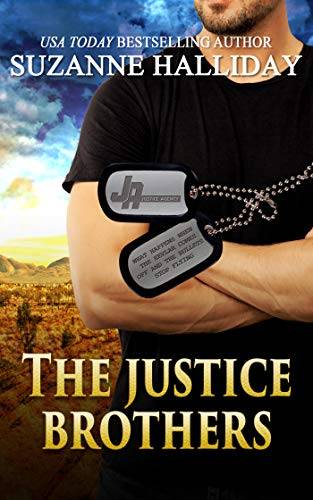 The Special Forces vets in this steamy box set are fearless on the battlefield — but will they risk it all for the women they love?

Cameron Justice was a throwaway kid heading for trouble. He found a sense of purpose on the battlefield in the Special Forces, but will it be enough to wipe out his painful past? Abused and neglected, Lacey Morrow is a lost girl determined to make something of her life, if only she could catch a break. Unlikely companions thrown together by fate. Now the rest is up to them.

Draegyn St. John is all that and then some…and he knows it. He’s the sexy 007 type, complete with tuxedo and an icy-blue stare. A Special Forces Vet with a serious attitude, he has women falling at his feet. It isn’t even a challenge, until Victoria Bennett comes along. She’s a tomboy waif—more nerd than goddess—who rocks his high and mighty world in a very big way—especially when what happened in Vegas, didn’t stay in Vegas!

Alexander Marquez is the founder and CEO of the Justice Agency. He’s ex-Special Forces, wounded in action and haunted by regret and what-ifs. After years of too much darkness and not enough light, he’s blindsided when Meghan O’Brien swoops into his life. She’s a ball-busting, curvy goddess who instantly pushes all of Alex’s buttons. When ghosts from the past threaten their relationship, will he finally send the demons packing and lay the past to rest to find his redemption in Meghan’s arms?

Sometimes the last thing you expect is exactly what you need.

It was free and still not worth it

I could only get 6% into this box set and had to give up. A good writer will show, not tell, and this story just does a lot of telling. The characters showed promise from the blurb, but the writing just doesn’t deliver.

These three books were great. It was very interesting to see how each of their stories came about. I really enjoyed how so different each one of them

The Justice men had a lot of emotional issues, especially Alex. Their strong mates didn't give up on them and everything worked out.

The story plots were great. However, I didn’t purchase the books to read about orgasms nor read so many foul words! Way too much of both!

This set of books that's about three exe navy seals and how they adjusted to life after they left the military.

I really enjoyed these books and I will recommend her books to anyone who loves romance novels. She is a good writer.

Oh wow! Not exactly what I thought I was getting! The three crazy brothers are serious, hard, and funny - sometimes at the same time! And then there is the fireworks between each brother and his soulmate! Definitely some head scratching going on in all three books, but it’s worth the wait! The author got the brotherhood of arms right! Can’t wait to begin the “Justice Family” series!

When these men finally found their soulmates , but being men that they are, will do something stupid. But they finally got their act together before it got out of hand. Love always wins ❤

Shadows in the Night

Betrayal at the Beach: A Cozy Christian Mystery