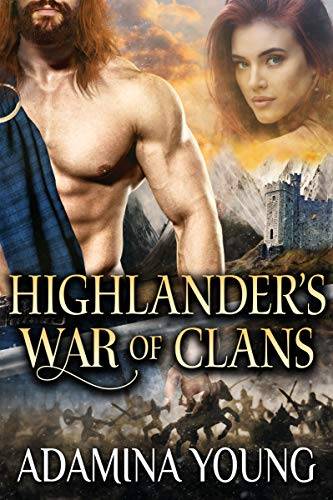 Their union was supposed to end the war, but it will only reignite it.

Laird McCleary and Laird Fraiser both know that if their powerful clans do not stop the war that has been going on between them, both will perish.

They have been fighting for decades, but all the blood that has been shed only proves that the two clans have equal strength and will. The only solution? The two Lairds will become allies by marring their children, Caitlin and Rhys.

Rhys Fraiser is a fierce man and a warrior, and he would do anything for his people, even if that means marrying Caitlin McCleary, his enemy. Caitlin not only proves to be beautiful beyond words but is also charming and caring like no other woman Rhys has met.

Instead of making him happy, Caitlin's qualities only complicate things, since this marriage was just another cold-blooded move on the chessboard! The union that was supposed to end the feud will instead fuel it, as years of bloodshed can not be forgotten that easily.

Caitlin and Rhys find themselves in the middle of a storm of hate, yet a newfound passion sparks between them like a flower in a snowy mountainside. But love and war can not coexist...

Their love must end this feud, or the winds of war will annihilate not only their lives but also those of their people.

Enjoy this Highland Historical Romance story filled with action, betrayal and romance with no cheating, no cliffhangers, and a guaranteed happily ever after, by best-selling author Adamina Young! Get your copy TODAY for FREE with Kindle Unlimited! Enjoy!
Tudor Romance Historical Scottish Fiction Classic Historical Fiction

Tequila Sunrise at the Rio Grande