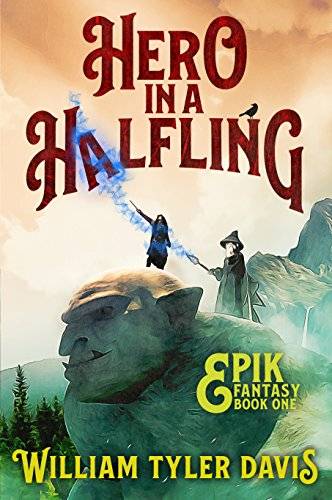 The Hobbit meets Robin Hood: Men in Tights in this “slight” parody.

In search of a father he's never known and of magic he's sure he’ll exhibit (once the timing is right), the young halfling moves to his local kingdom. There, Epik becomes the apprentice to the first wizard he meets – the only wizard left in the city. And for the first time in his life, the halfling makes friends, most notably with a beautiful half-elf girl named Myra.

As a secret sect meet to plot the king's demise, a family of mountain trolls threatens the city. And Epik sees the opportunity to do something, well, epic.

He must learn magic.
He must save the girl.
And he must protect the kingdom . . . Before it falls into the wrong hands.

Spot the pop culture references, uncover the realm’s mysteries, and chuckle your way through this light-hearted fantasy adventure.

Hero in a Halfling is the first in the Epik Fantasy Series. Perfect for fans of both Discworld and Middle-earth. Snag your copy today on Kindle, audio, or print!

A fun romp through alternate NYC

A fun romp with the characters and creatures of LOTR!
Or was it through the boroughs of NYC with half-elves, half-dwarves and a very confused Halfling?
I’m not entirely sure what I just read... but I am sure I laughed a lot and want to read more of it.

I would rate this book as nothing more than okay at best. I get the humor and references but don't find them all that funny or amusing. Definitely not "out loud" funny and not the kind of humor I expected or thought it would be. Story is very slow moving , not very engaging, and a bit boring. Rated it 3 stars only because a YA reading fantasy for the first time "might" enjoy it. Think starter book. I personally am not buying book #2.

A little slow going, but pretty worth it.

A little slow going, but pretty worth it. I imagine there is a lot of world building and character introduction in this first book. Enough, to keep me going to buy the second book, hopefully more exciting. We will see.

If Tolkien had teamed up with Terry Pratchett to write a story it may well have been this one. There is fun and adventure on every page along with the footnotes that both of those greats loved to use. The writing isn’t quite up to the standards of those great authors but the signs of future greatness are there. I ,for one, will be watching this author as he grows.

Fairy tale reference amusing, premise was familiar, but just not enough to hold me and make it worth my time.

A surprisingly fun read. While quite derivative.. It's mostly the jokes and I enjoyed them. They story really picks up near the end and I enjoyed the tale. The characters are pretty interesting and I think there is a good amount of room to work in that.

Was enjoying the story until it aS, plain the author just had to introduce behavior I find repulsive. There was no need to do so as the story was white good without it. Due to this I doubt I will read any of h Dr stories from this author.

To Date an Immortal

Shelter from the Storm: A heartwarming tale that brings together hope and happily-ever-after