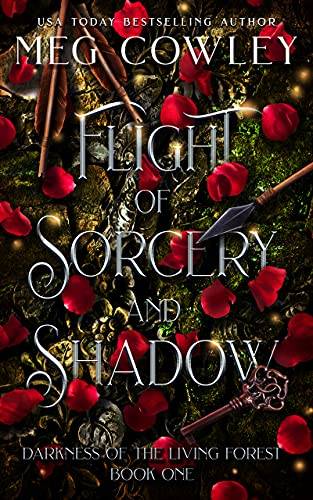 A captivating and darkly delicious romantic fantasy perfect for fans of Throne of Glass and Air Awakens.Aedon's captivity is over when darkness descends upon the realm. The elf's only choices become escape or death—a far cry from his past fame and notoriety as a legendary thief. Lost, alone, and desperate to escape the deadly beasts now stalking him, he does not count on meeting Lief, a ranger of the woodland elves...and Aedon's natural worst enemy.
Lief prides herself on being one of Lune's finest rangers—now, she is the only one left alive. She must alert the Queen at once that the realm's defences have been breached by unimaginably malevolent sorcery. The last thing she needs is to stumble upon an escaped prisoner.
Aedon and Lief become unlikely allies. Neither can survive without the other in a deadly race to outrun what hunts them. Lief must learn to trust another again, and Aedon must dust off his once legendary skills if they are to escape—but what else will bloom in the darkness that niether of them can deny?
An old enemy rises. Stronger than before. He will consume all in his path, until dominion over the world is his. Multiple fates are bound in an inexorable descent into darkness.
This new series from USA Today Bestselling Author Meg Cowley can be enjoyed as a new entry point into the Altarea world, or to dive back into the saga and discover what happened after the events in the Chronicles of Pelenor: Rise of Saradon series.
From irresistable enemies-to-lovers and found family to heartrending betrayals and redemption, the complete Darkness of the Living Forest trilogy will keep you turning pages all night to a gloriously bittersweet and satisfying finale and your next bookish hangover.
Sword & Sorcery Fantasy eBooks Coming of Age Fantasy eBooks Mythology

Not into same-sex attraction

The story was interesting and fun to read for the most part, but I won’t be finishing the series. Same-sex attraction is not my thing, and there are so many good books out there without it. If I had known it was in this book, I would never have started it. If you like that kind of thing, carry on. This is merely a heads up for those who don’t.

The story was enchanting,exciting and well thought out. The characters were displayed in a 3D world. Hang on for more.

It is a story. It can be read.

Characterization is decent enough. At least the book has uniquely defined characters, although there isn't much in the way of internal or external character conflict or compelling traits.

The narrative is split into three parts, although one of them is hardly given any attention at all.

The first story involves a disgraced war hero who's being kept prisoner by the elf queen for his entire life for reasons that make no sense and the uppity wood elf ranger he runs into fleeing from an undead blight that is spreading through the forest.

The guy just happens to escape his imprisonment due to the encroaching blight and literally runs into the ranger chick in the middle of the woods. She is lacking in positive character traits, as she immediately comes off as a stubborn duffus who proceeds to get herself idiotically infected with the undead blight. He is a self depreciating mope who thinks he deserves to be imprisoned in a tree for the rest of his life. Even though he took the chance to escape. Go figure? Despite coming off as relatively decent and affable compared to her, he decides to be a noble hero again and try to help save her from her stupidly self inflicted soon to be undead state. His character trait still boils down to "charming rogue" with little more than a slick flirty smirk to back it up. She is stand offish and ignorant and bound and determined to insist at every turn that she can handle herself on her own when she clearly can't.

What ensues is a sort of buddy cop situation with a few pointless nods at a budding romance sprinkled in. The plot itself has a few tense action moments but nothing spectacular. In the end, nothing is really ventured and nothing is really gained. The characters don't change other than developing a newfound respect for each other. Neither of them are particularly interesting or feature any unique talents other than archery and fire magic. Pretty basic.

Their desperate flight itself doesn't feature anything particularly compelling or original. Nothing you've not already seen in stock fantasy a million times before.

The second story involves a student at a library for magical sentient tomes. What these tomes are used for, how they're made and why they're sentient is never explained. But if I were a sentient book who is kept chained up to a shelf or in cages in the dank cellars of an old castle forever I'd be understandably angry as well. This implication is merely acknowledged and summarily dismissed as if it is of no consequence.

The protagonist of this story is your standard meek socially awkward librarian. Sure, she's cute but she's no different than any other nerd girl you've ever seen in young adult fiction. This library irresponsibly lets her - a mere apprentice - perform a dangerous task without supervision that results in her letting a deadly monster loose on the library that someone apparently left to wander around. She then spends the entire story trying to deal with the matter herself in secret instead of telling the head librarian about it like she should. It's a premise once again based on the character's own incompetence only this time made worse by her inability to take the right and sensible course of action. In the end, I really couldn't care much because, even more so than the first story, it seemed like the characters deserve the problem they made for themselves.

The third story, and by far the briefest and of least consequence, is about a boy and his dragon who are part of a mission to find out what happened to a missing patrol. Not so long story short: they find the dark army and get captured. The End.

These Tales of Tir-na-Alathea are simple little fairy tale stories you'd tell your kids before bed time. These are not big sweeping epic fantasies. Not a whole lot of thought has gone into them and not a great deal of care has gone into their telling. But they are whimsical little tales not unlike an episode of a children's cartoon. That, in and of itself, is alright. Just don't expect anything more than that.

Flight of Sorcery and Shadow by Meg Cowley is Book 1 of the Darkness of the Living Forest series. Meg's imagination and use of the written word knows no bounds. This is beautifully written with detail that places you in the story experiencing it along with the excellently developed characters. Aedon is back. He has been in solidary confinement for 25 years and is down on life. Because of the evil brewing in the Kingdom, he is accidently released from prison. He shortly meets up with Lief, a wood elf, who is determined to return him to prison. We also meet twins Venya (a junior librarian at the Athenaeum) and Vasili and his dragon Icarus (members of the Kingsguard dragon riders). It will be very interesting to see how Meg ties the multiple storylines together. Received an ARC and this is my voluntary review.

Alright, Meg’s stories take us on another magical adventure. So far, there are at least three timelines and three sets of characters, which, so far, don’t interconnect except for the black magic that winds through each of the stories. Where to next?

I loved this book. It tied up the loose ends from the previous books in the set I finished before reading this book.

I really enjoyed this continued vision of the Pelenor world. Elves, dragons, magic, all my favorite things. Highly recommended. I look forward to book 2.

This is a disappointment

I was looking forward to a new series by Meg Cowley, especially since it tied in with Pelonor, but it failed to hold my attention. Too many editing issues which bring me suddenly up short out of the flow. Too many mistakes. I didn't finish reading, this is only the first in a series and I don't plan on reading more of the same choppy writing. That's just not fun

If You Were Mine