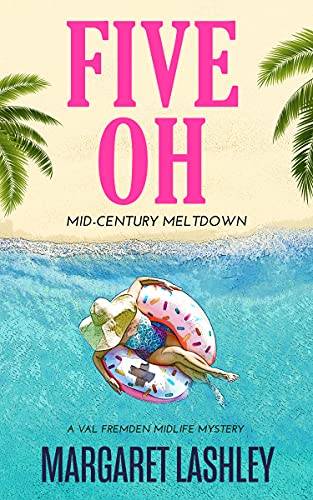 Killing Two Birds with One RockVal’s always been unlucky at love – and a whole bunch of other things.But she’s never actually felt cursed. Until now.When Tom gives Val an engagement ring for her fiftieth birthday, she wants to fly the coop. But it’s Tom who skips out on the romantic getaway he planned. When he can’t make the trip, one of Val’s pals goes instead. On the first day, her friend entangles Val in a prank that ticks off the wrong tourist. On the second day, she gets Val charged with murder.(Did I mention Val was unlucky?)To clear her name, Val must go fishing to lure in the real culprit. But what kind of bait do you use when you don’t want to get caught yourself?With both marriage and jail feeling like impending life sentences, Val’s going to have to do some pretty fancy angling to get herself off the hook this time….If you like deeply flawed characters and laugh-out-loud situations, you’ll love Five Oh. It’s the fifth book in Lashley’s hilarious Val Fremden Midlife Mystery series. She's a lovable, bungling mess who's a bit older, a tad more jaded, and a ton more experienced in big-time failure. Life’s been tough for Val. Still, she always manages to find her way with sardonic humor and an intrepid spirit. A gin and tonic now and then helps, too.P.S. If you love humorous, page-turning mysteries like those by Deborah Brown, Julie Mulhern, Lucy Quinn, Tricia O'Malley, Gemma Halliday, Karen Cantwell, Tara Sivec, Liliana Hart, Libby Howard, Chelsea Field, Jana Deleon, Gina LaManna, Janet Evanovich, Denise Grover Swank, Amy Vansant, and Stephanie Bond, you just might love Glad One, too!

Wow. I love Val and Tom

I love this series. It makes me think about life and choices. No one makes anyone happy. Only you can make you happy. Now to figure out how.

Book 5 in the series

Tom makes reservations for a week at an upscale beach resort then is delayed for a couple of days so Val and Cold Cuts use the first few days. That’s when the adventure begins. Lots of twists and turns before it’s over.

50 is nuthin for Val and this crew!

Having read book 1 through book 5; within the past 2 weeks or so tells me I love this series! Who says a nutsy, 50 year old klutz with commitment phobia and A passle of scary somewhat nasty friends can't be the basis for this best series ever? Love the off beat plot and ups and downs of five-0; it's on to the next.

Val is the best!

Val is such a relatable character and her group of friends keep me laughing! This is a great series to follow.

Great series if you are a fan of Stephanie Plumb. Funny and easy reading with quirky characters. Looking forward to the next book

I just love this series! The whole clan is fun and the writing is so witty. Moving on to#6. Thanks Margaret. So glad I found you!

Wishing On A Star: A Shooting Stars Novel

Summer Heat: A Storm Inside Novel

The Girl Who Crossed the Line: A reckless girl. A grave mistake. Where it all began.... (Red Heeled Rebels)

A Governess of Great Talents