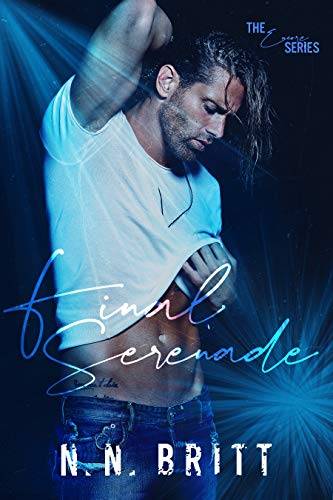 A secret affair with your teenage celebrity crush? Yes, please!
Music journalist Cassy Evans believes her career is made when she snags an exclusive interview with rock singer Frankie Blade.
Once a superstar of the generation, Frankie has been a recluse since a freak motorcycle incident sent his own career into a tailspin seven years ago. Now that he’s returned to claim back his crown, Cassy hopes to kill two birds with one stone—secure her magazine a top spot in the rankings and meet with the man of her adolescent dreams.
A dinner invitation isn’t what she expects to get out of this interview, but the chemistry between them is undeniable.
With paparazzi watching Frankie’s every move as the two jump into a stormy relationship, Cassy risks her professional reputation and her privacy—and possibly her heart—to be with the biggest rock star on the planet.
But is Frankie worth it? Is he the humble man she thinks he is or is he just that good at hiding his demons?
◆◆◆
Final Serenade is the first installment in “The Encore” series and part one of Cassy and Frankie’s story, which concludes in One Last Verse.
Frankie and Cassy return as supporting characters in books three and four, where you will follow Dante on his journey.
The best way to inhale the books: 1) Final Serenade2) One Last Verse3) Shattered Chords4) Red Hot Harmony
Contemporary Women's Fiction Women's New Adult & College Fiction City Life Fiction

One of the best rockstar romance books I have read. Love the way the author developed the 2 main characters and also the secondary characters. An excellent read- can't wait to read the 2nd book. Really enjoy this author!

Loved this so much. Grabbed me from the first page. Now I need to go the second to find out what happens.

The writer captured my attention and made me feel like I was right there in the Hollywood hills with Cassy and Frank.

A forbidden romance that I thoroughly enjoyed! Warning, make sure you have time to read this book and the next because this one ends with a cliffy!

HOLY COW!!!!! What did I just get myself into! This book was so intense, and captivating and amazing! How can I even go on with my life not having book 2 right away!

I was hooked and couldn't put this down. The characters, the story line, the drama and suspense had me unable to stop reading and now I have to wait to see what is going to happen to Frankie and Cassy.

There are not enough words to describe how much I loved this book and you will definitely want to get your hands on it ASAP!

I wasn’t intrigued enough to finish reading this book.

The Cursed Witch: A Paranormal Enemies to Lovers

Rise of a Legend

The Demise of Gladys King