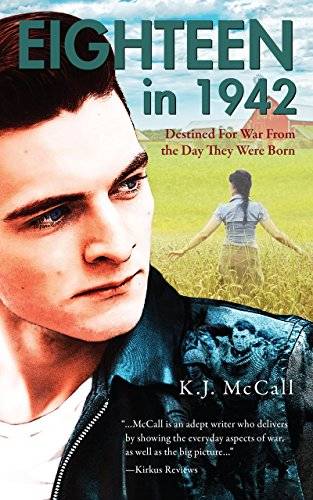 In February, 1945, 350 captured U.S. soldiers were taken from a German POW camp and transported by cattle car to Berga, slave-labor camp for European Jews. Inspired by this shocking and little-known event, K.J. McCall weaves fact and fiction in a story that begins in a small Pennsylvania town in September, 1941 when America is still at peace and much of the world is still at war. Corbin O’Connell is then just a high school senior, stuck on the family farm, snared by the conniving Velma, hopelessly in love with Daisy, his best friend’s girl. All he knows of the war is what he sees in newsreels. But everything changes on December 7, 1941, and 1942 finds him standing in line to register for the draft only two weeks after graduation. He’s headed for big trouble and doesn’t know it. To him the war is simply a convenient escape from his troubles and, blind to reality, he’s eager to enlist. But he will see. Far from home, he’s swept up in world conflict, and life veers off in its own mad direction when he’s captured by the Germans.

The Book of Five Rings