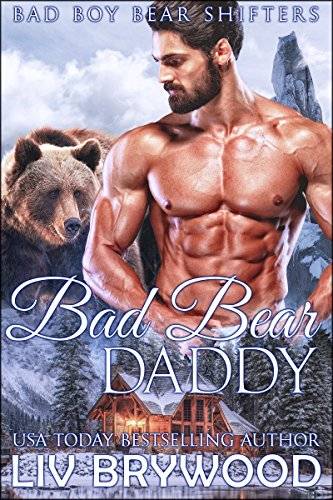 He was a mess. A bar-brawling, heavy-drinking, barely employed disaster—but she couldn’t stop thinking about him.

Bad boy bear shifter Kade Hunter knows how to nurse a beer… but a baby? No way! He couldn’t possibly have a six-month old kid. Except, he does. His days of brawling and boozing it up at the local roadhouse are over. He doesn’t know the first thing about taking care of a kid. Terrified of making a mistake, he asks for help from the one woman who has every right to ignore him…

Ten years ago, deputy Emily Redson walked away from the hot mess that is Kade Hunter. Now a respected member of law enforcement, she can’t be seen with the bar-brawling shifter. She wants to ignore him, but the fear in his eyes makes her pause. He’s tempting in all the wrong ways, and if she can’t keep her hands to herself, her career could go down faster than his next beer. She always was a sucker for someone in need, but is trying to save a bad boy worth the risk?

This is the second book in the paranormal romance series – Bad Boy Bear Shifters. This is a stand-alone book with no cliffhangers. Love scenes are fully realized and at times include explicit language.
Holiday Romance Psychic Romance Paranormal Demons & Devils Romance

For as serious and at times scary this story was I was giggling or swooning most of the time. I love the devotion to family and the strong support. Second chances can be so sweet.

A Bad Daddy or A Really Good Man ?? OVER 18 READING

This bear shifter who thinks he is the biggest, baddest, bear in his clan and he has a very long rap sheet for fighting and drinking.... And as they say it is fixing to bite him in the a**. In another fight he is surprised when a female deputy (his ex who he hasn't seen in years) arrest him but he is more surprised at what she has to tell him. His shock at having been possibly identified as the father of a baby whose mother has just died in a car accident, custody will be decided the next day if the DNA proves it is his. He knows nothing about babies, he has nothing for a baby but a fast trip to the store gets most of what the store keeper said he needed along with a baby book telling him about babies. Now to go home and prove he can care for his son because the judge gave him 90 days with weekly surprise visits from the deputy and reports to him on how he's doing before he will decide if he as father or the baby's maternal grandmother gets custody. But it's not that easy, the baby is screaming wet? No .. hungry? No Knocking , oh Shi* it's the deputy and she is mad at what she sees. There is so much fun as they each secretly begin to realize they still care about each other as friends (but both of their bears know the real truth but don't tell them, yet) . Then the judge privately tells her not to get involved until after he gets custody. There is also his mother and the sheriff getting involved, the baby is kidnapped and she plans to harm the baby. Can they stop it? What happens as he tries to grow up, raise a child, reclaim the only love he has ever had and his mother finding a HEA too makes for a really good story.

Good story. I thought there would have been a little more with guys that jumped Kade. But maybe in another story. Good read!

Holy shiznet!!! What a gr8 story. Tucker is a bear shifter who likes to drink and fight. But he needs to get himself together when he finds out he's a father. I recommend this read. 5 Thumbs up

Bad boy bear shifter Kade Hunter is a fighter and gets in trouble all the time. He gets in a fight at the bar and gets arrested for the night.Ten years ago Emily Redson left when Made was too drunk to take her to her fathers funeral. She left town and came back as a respected law enforcement staying away from Kade. She lets him know that he had a six-month baby and she died and she left the baby because he was father not knowing about him. The girls mother and Kade was trying to custody of his son. The judge gave his three months is straightened his life to get full custody. The grandmother kidnapped him and got killed but Emily and Kade couldn't keep their hands off each other and he was determined to win her back

Loved this story. This books shows how you can change if you have the right motivation. Know one can tell you what you set your mind on doing.

long lost love can change a person. discovering you have a child can add drama to a life. love fixes all.

One big happy family is a great ending to this awesome story. Bad boy learns to be goid and the good girl gets a little naughty.

The Juggernaut: A space action-adventure mystery