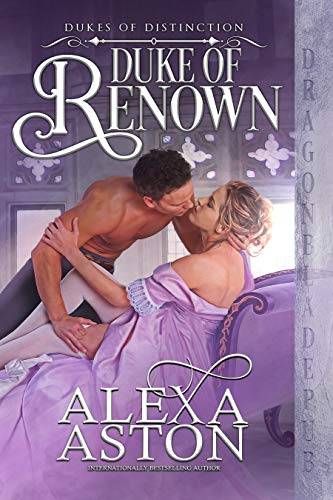 Who doesn’t love a duke? How about five of them?

Phoebe Smythe, Countess of Borwick, suffers a tragic miscarriage when she learns her husband and young son have been killed in a carriage accident. The grieving widow retreats to an isolated cottage on the coast of Cornwall, where she finds a smuggler who’s washed ashore, blood leaking from a bullet wound.

Captain Andrew Graham returns home from the Napoleonic Wars after the death of his older brother, finding his father on his deathbed. Soon he becomes the Duke of Windham and must deal not only with numerous responsibilities but his wayward half-brother, who has amassed a mountain of debt and then shoots Andrew so he can become the new duke.

Andrew awakens to an angel of mercy, Mrs. Smith, a middle-class widow who nurses him back to health. She thinks he’s a criminal, which amuses him, but he soon falls in love with her beauty and spirit. On the day he decides to ask for her hand in marriage, she disappears and he has no way to find her—until he spies her across a London ballroom.

Though her heart belongs to the Cornish smuggler she left behind, Phoebe places herself once more on the Marriage Mart. She yearns to be a mother again—which means finding a husband.

What will Phoebe do when she learns that her Mr. Andrew is none other than the famous Duke of Renown?

Find the answer in The Duke of Renown, Book 1 in the Dukes of Distinction.

Each book in Dukes of Distinction is a standalone story that can be enjoyed out of order and can be read for free in Kindle Unlimited.

In joyed the book, but I wasn’t crazy about the semi-climax. I think the book ends than begins again with a semi-climax. It was an enjoyable story, but not great.

Enjoyed the book and the fact that it didn't end abruptly when the main couple connected and settled. The pace of the circumstances did not drag on, it kept my attention.

A tried and oft told tale of the British Lords and Ladies. Greed was the villain in this particular situation. The older son inherited the title and all it entailed while the younger son coveted. However, murder is not the way to a full and happy life.

A combination of love and romance along with tragedy and some exciting suspense and drama. It may be set in the 1800's but it is just as enjoyable as more modern romance novels.

A very enjoyable story with intriguing characters. After sorrow comes love and a new life with love and joy for them.

This was a very enjoyable book to read. I liked that it was fast paced, didn't linger on unimportant stuff and had great characters.

I thoroughly enjoyed the story. The coarse language though few and far between added nothing of value to it. You could have left it out. You almost lost a reader.

This was a good story, with characters who were very likable if not terribly smart—the hero, an officer, being so dense about his stepbrother. Aston packs her stores with lots of ins and outs that make the story skip along when she isn’t spending too much time in their heads, especially those of her male characters. The stirywas bakanced and mostly interesting. Nice, quick read on a Sunday afternoon.

I'm excited to finish the first book in the Dukes of Distinction series. I look forward to reading more novels by this author.

Oh my this book made me swoon! I love these healer books where one character takes care of the other and fall in love. So many little things Andrew did, thought, and said were so romantic. A reread for sure and I have already downloaded the second in the series. Thank you, Alexa!

This is an OK historical romance, but I did have some issues with it.

First off, all of the books I've read (four, so far) in this series follow the same basic plot line.
1. The h is a widow who had an unhappy marriage, and is wishing to get married again so she can have children -- but she doesn't trust men or believe that love is possible.
2. The H has some reason why he hasn't married, and just sleeps around, basically using women. Something in his past makes him not believe in love. Sometimes his womanizing is due to a past romantic betrayal -- but in this one, he has been fighting in the Napoleonic wars.
3. The couple falls in instalust, and soon in love. For some reason, she thinks they can never be together. But the H, who is now a suddenly completely reformed playboy, thinks they can marry.
4. He does something to convince her they can be together, or finds her after she disappears.
5. Just before or after they marry, an insane man tries to kidnap and hurt the h, and the H saves her.
6. They live happily ever after.
This plot line is OK, but using it in all the books in one series is just too much. The author needs plot variation in her romances, so that they don't all follow the same basic format.

For the most part, I liked both Andrew and Phoebe, but I did get a little annoyed with both of them when they lied to each other about who they really were. Well, she lied, and he allowed her to believe he was someone other than who he was. Both of them thought they had good reasons for lying, but it hurt their relationship. When they get separated, Andrew is surprised that he can't find her? Things like that happen when you don't tell people the truth!

The story was mildly entertaining, so I am reading the rest of the series -- but I probably would not continue the series if it wasn't free with Kindle Unlimited. Because of the issues I noted above, it gets 3.5 stars from me, rounded down to 3 stars.

My rating system is below.
1 star -- Hated it, or did not finish. I usually only give this rating if some of the content is truly objectionable to me, like if one of the main characters does something really awful, and gets away with it.
2 stars -- Didn't like it. This rating usually means that I thought the writing wasn't very good, the editing was terrible, I didn't like the characters, or it had other major flaws.
3 stars -- I liked it, but had some minor issues with it. This rating means that there were minor editing issues, the story needed more character development, it was just too unrealistic, or had some other fairly minor issue. The majority of books I read get this rating – I do not consider it a bad rating.
4 stars -- I liked it a lot. This is a high rating for me, and I rarely give a higher one.
5 stars -- I loved it, and will probably read it again. Very few books are good enough to get this rating from me. The ones that do are usually classics.

This book was nonstop action and/or suspense,
While still believable.

I recommend this book for all lovers of a steamy and passionat love story.

I loved the fact that she didn't pretend the villain was somehow a mystery. The manhunt and alertness lasted a couple of pages then they were satisfied and went home. Most books tell you there is a mad killer on the loose and then have the characters continue their daily lives as if nothing occurred. This one was logical and the villains actions were explained away as him being stupid.

This was a very good read. Wonderful start to the story where they meet not knowing exactly who the other person is. There was intrigue involving the brother and various aspects of the story making for a page turning story.

This is a slog fest. It's so long and tedious. The only reason it's 2 stars is because I didn't DNF but skimmed through to the end. It just goes on and on. There's a whole chapter detailing the h's day, does nothing to advance the story, just extra details.

Overall, do not recommend

Phoebe, Countess of Borwick, suffers a tragic miscarriage when she learns her husband and young son were killed in a carriage accident. The grieving widow retreats to an isolated cottage on the coast of Cornwall, where she finds a smuggler who washed ashore, with blood leaking from a bullet wound. Captain Andrew Graham had returned home from the Napoleonic Wars after the death of his older brother. He finds his father on his deathbed and soon becomes the Duke of Windham. He must deal with numerous responsibilities and his wayward half-brother who amassed a mountain of debt. The half-brother shoots Andrew so he can become the new duke. Andrew awakens to an angel of mercy, Phoebe, a middle-class widow who nurses him back to health. She thinks he is a criminal, which he finds amusing, but he soon falls in love with her beauty and spirit. On the day he decides to ask for her hand in marriage, she disappears and he has no way to find her. He later spies her across a London ballroom. Though her heart belongs to Andrew, she places herself on the marriage mart because she yearns to be a mother again. - This s a wonderful romance. Two thoughtful and loving people find each other and true happiness. I enjoyed this interesting historical romance. It takes us through their time together, not just getting together and ending. I highly recommend this one.

It was so nice to read a story that was different. Too many have the same contents just written differently or in a different order. This was sexy and romantic with a great story.

Wow the story line and characters are unbelievable. Loved from page one to the last page. The tragedies to the love that conquers all.

The Color of a Dream