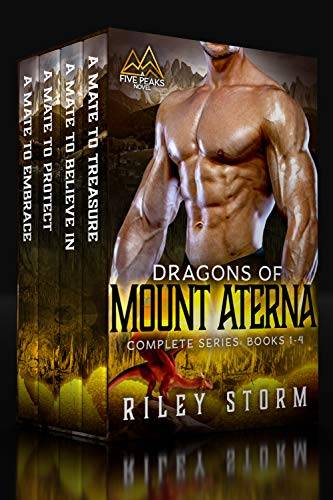 Four dragons in search of the love of a lifetime. But first, they must prove they are worthy.

The small mountain town of Five Peaks has a secret. It’s home to dragons. Mighty beasts that keep the skies and the streets clear of supernatural crime. They live apart, rarely venturing among the humans they are charged to protect. When they do, it’s in search of love…or to chase down a rogue enemy.

This box set contains the first four stories of the Five Peaks dragon clans, and their quest for love unending. A bond that will burn brighter than their strongest fire, and last longer than the oldest tales. To claim their mates, these dragons will have to shed all they have been, and realize who they truly are.

A Mate to Treasure: Dragon shifter Asher has always thrown money at any problem he has come across. It’s worked fine for him in the past, but when he meets Emma, he realizes there is something more important than his gold…

A Mate to Believe In: His clan has been robbed, and its up to Pace to find out who did it. To do that, he’s going to need the help of a human sheriff. It should be easy, but every time he looks at her, he loses focus on the case…

A Mate to Protect: Kal Aterna has lost it all. The dragon shifter has been stripped of his prestige and respect, and left to wander alone. Until he finds a woman on the run from a vicious ex. Kal steps in, eager to do what’s right, but is he saving them, or are they saving him?

A Mate to Embrace: Five years ago Braz let her go, unable to speak up. Now his mate is back to attend the funeral of her ex-husband, and this shifter isn’t letting go. Not again. The timing might be horrible, but he knows he may never have another chance.

Readers love the dragons of Five Peaks and their mates. Check out what they’re saying:

★ ★ ★ ★ ★ “A fun read that keeps you wanting to see what was coming next and enjoying the read to the last.”

★ ★ ★ ★ ★ “…full of thrills, suspense, action, heart stopping fright and even a little bit of laughter.”

★ ★ ★ ★ ★ “For anyone who wants a great read, and a story that keeps you captivated until the very end…these books are for you!”

★ ★ ★ ★ ★ “This author creates visual moments with her writing that draw the reader to become lost in the action of the plot.”

★ ★ ★ ★ ★ “If you enjoy strong dragon shifters and the equally strong women who love them, along with action and laughter, then this is for you. Enjoy!”

★ ★ ★ ★ ★ “Adventure, danger and lots of humor creates the greatest journey to life and love!!! I'm hooked and you will be, too with the Dragons of Mount Aterna!”