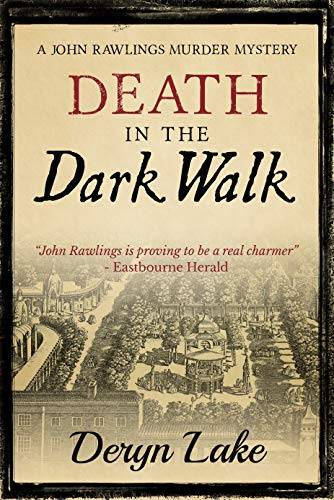 Having just finished his indentures, Rawlings is celebrating in Vaux Hall Pleasure Gardens when he trips over the body of a young girl.

Summoned to the magistrate’s office as prime suspect, Rawlings not only clears his own name but impresses Fielding so much with his power of recollection that he is asked to investigate the crime. From gaming hell to fashionable house, Rawlings follows a trail of lustful liaisons and illicit intrigue which prove beyond a shadow of doubt that the girl has had quite a past … a past with threatening secrets.

Death in the Dark Walk is a richly atmospheric and compelling Georgian mystery woven around the real characters John Fielding, the phenomenal sightless magistrate known as the ‘Blind Beak’, whose Runners formed London’s early police force, and John Rawlings, the Apothecary reputed to have invented soda water.

‘evocative Georgian mystery … if you love a good whodunnit you won’t be disappointed’ - Evening Argus, Brighton

‘an absorbing murder tale set in Georgian London … splendidly evokes the atmosphere of the capital with all its elegance and intrigue. Wonderfully descriptive, it deserves to be a success’ - The Kent and Sussex Courier

‘A wealth of marvellous characters parade across the pages, their dialogue is lively and John Rawlings is proving to be a real charmer’ - Eastbourne Herald

‘An effervescent tale...the author organises her large cast and colourful background with skill and gusto through a racily readable drama’ - FELICIA LAMB in the Mail on Sunday’s Night & Day Magazine

Deryn Lake started to write stories at the age of five, then graduated to novels but destroyed all her early work because, she says, it was hopeless. A chance meeting with one of the Getty family took her to Sutton Place and her first serious novel was born. Deryn was married to a journalist and writer, the late L. F. Lampitt, has two grown-up children, four beautiful and talented grandchildren, and one rather large cat. Deryn has lived near the famous battlefield of 1066 for the past 16 years where she enjoys her life as a woman about town. She is also the author of Fortune’s Soldier, Sutton Place, To Sleep No More, The King’s Women and Pour The Dark Wine.

Murder in the Family

Civil Rights Movement: A History from Beginning to End