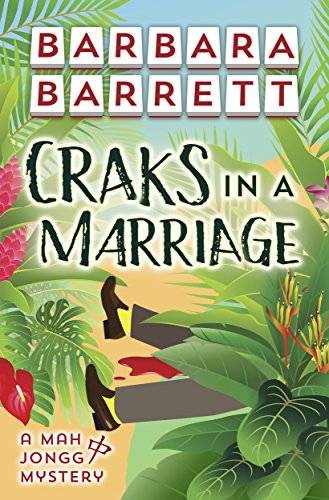 When Sydney Bonner overhears a fellow mah jongg player arguing on the phone with her husband, she realizes the couple’s “perfect marriage” isn’t all it appears to be. A few days later, the husband is found dead, his head bashed in. Fearing she’ll be considered the most likely suspect, the widow prevails upon Sydney and her three friends—Marianne, Kat and Micki—to find out who really killed him.

Though none of these four fun-loving, take-charge retirees has any training as detectives, the women agree to launch a secret investigation. As they dig under the happy veneer of their community’s social life, they find more than enough suspects, from shady ladies to resentful golf buddies, to keep them looking over their shoulders.

Could the murderer be lurking among the talent in a chaotic production put on by Sydney’s husband, who will do anything to keep busy in retirement? Could the sheriff, who may have more than a professional interest in chanteuse Kat, end up pinning the crime on the women instead? Each discovery during their investigations and their weekly mah jongg game keeps them running as they close in on the killer—but the killer may also be closing in on them.

This cozy mystery, the first in the Mah Jongg Mystery series, features four retired amateur sleuths who live in the small Florida town of Serendipity Springs, all female and all friends who play the game of mah jongg together. Though they don't set out to investigate murder, after their first experience in this story, others start looking to them to help investigate subsequent homicides and questionable accidents. In this first book, Sydney Bonner takes the lead, although she turns to her three friends for help. Though this series features four protagonists, the others will take the lead in subsequent stories. Two are married, one is divorced and the fourth, who has been single all her life while she tended to her ailing mother, now finds herself the object of the sheriff's attention in this series.

The four don't seek out murder; somehow the circumstances and those affected drag them in. Meanwhile, as they attempt to gather information, life goes on in their community in such activities as a women's club, a social group for those over 50, real estate transactions, numerous stops at the local coffeehouse, and even a shopping trip to Naples. Sydney's husband, Trip, and her friend Marianne Putnam's husband, Beau, are golf buddies who spend many a day on the course. When not there, Trip is busy seeking to build a new post retirement life, and Beau is often prevailed upon to join in Trip's latest activity, which in this first book is a town follies. Kat Faulkner has lived a frugal life until winning big in a lottery shortly after her mother's death; suddenly, Kat has money and doesn't know how to spend it. But her divorced friend and freelance writer, Micki Demetrius, does, even if it's to guide Kat through a makeover and wardrobe change for her lounge act.

This cozy mystery is the first book in the Mah Jongg Mystery series. Barbara Barrett is already published in contemporary romance. She is a member of the Mystery/Romantic Suspense chapter of Romance Writers of America. Like her protagonists, she is retired and is a resident of Florida, although she spends her summers in her home state of Iowa. She spent over three decades as a human resource management analyst with Iowa state government. She can be contacted at [email protected] Check her website at barbarabarrettbooks.com.

Too Clever By Half