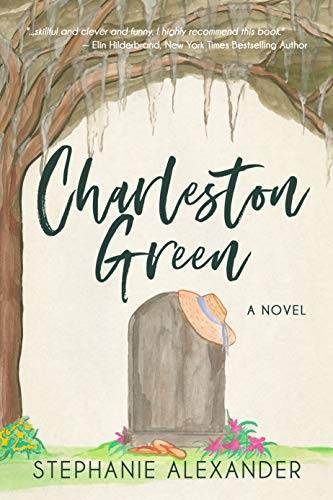 2020 Chanticleer International Book Awards Finalist for Paranormal Division
2020 Publisher's Weekly BookLife Prize Quarter Finalist for Fiction
2020 Readers' Favorite Book Awards Silver Medalist for Paranormal Fiction
“I am always on the lookout for exciting new writers, and once I started reading Charleston Green by Stephanie Alexander, I was captivated. This novel leaves the reader entranced; the writing is skillful and clever and funny. I highly recommend this book.” —New York Times Bestselling Author Elin Hilderbrand
“With humor, heart and a heaping helping of Southern Charm, Charleston Green brings an entirely new meaning to the term 'unwanted house guests.' Tipsy is a lovable, flawed, complex heroine that readers will root for from the first page to the last—and pitch-perfect storytelling will leave fans begging for a sequel. This is Stephanie Alexander at her best!” —USA Today Bestselling Author of Feels Like Falling, Kristy Woodson Harvey
If Tipsy Collins learned one thing from her divorce, it's that everyone in Charleston is a little crazy—even if they're already dead.
Tipsy, a gifted artist, cannot ignore her nutty friends or her vindictive ex-husband, but as a lifelong reluctant clairvoyant, she's always avoided dead people. When Tipsy and her three children move into the house on Bennett Street, she realizes some ghosts won't be ignored.
Till death do us part didn't pan out for Jane and Henry Mott, who've haunted the house for nearly a century. Tipsy's marriage was downright felicitous when compared to Jane and Henry's ill-fated union. Jane believes Henry killed her and then himself, and Henry vehemently denies both accusations. Unfortunately, neither phantom remembers that afternoon in 1923. Tipsy doesn't know whether to side with Jane, who seems to be hiding something under her southern belle charm, or Henry, a mercurial creative genius. Jane and Henry draw Tipsy into their conundrum, and she uncovers secrets long concealed under layers of good manners, broken promises and soupy Lowcountry air. Living with ghosts, however, takes a toll on her health, and possibly even her sanity. As she struggles to forge a new path for herself and her children, Tipsy has a chance to set Jane and Henry free, and release the ghosts of her own past.
Genre Fiction Southern United States Fiction

Loved this book. the books has a little bit of everything from romance to mystery. So glad the next book is out now

I loved this book. It really gave the reader a sense of modern day Charleston. The characters were very real and engaging , and the ghost story gave a well researched glimpse into Charleston's past. I very rarely leave reviews , but I enjoyed everything about this book which is not typical for me. This author really knows the low country and all it's traditions past and present.

Mystery and the Realities of Love

Charleston Green: A Tipsy Collins Novel book one by author Stephanie Alexander published by BooksGoSocial brings of mystery and the realities of love

Charleston Green is about Tipsy Collins, a newly divorced mother of three who is a struggling artist. When Tipsy and her children move into their new home she finds that there is more than one guest living there that she cannot ignore. Tipsy goes on an adventure to unravel the mystery of her new home and centuries-old murders, while her ex-husband is causing nothing but trouble and drama. When all she wants is to start her new life, become an artist again, and maybe find love.

Throughout the book, there are a lot of characters you don't even meet there just mentioned but they're intricate to the story. So sometimes it's hard to follow. Plus there are a lot of landmarks that are mentioned in the book that are described but not in a very typical kind of way. Plus there are a lot of landmarks mentioned in this book, some are easily described and others you may have to look up to get a better visual. One of the things that you might find yourself looking up is what's a joggling board. Her relationship with Will was a little bit bland but wasn't bad. I get it it's not the main story but still, a little something more would have been nice.

The character's backstories are very intricately written to keep you entertained. And there are no discrepancies in their backstory. Which can happen a lot with stories with so many characters. The story flows very nicely between each chapter so you don't feel like you're missing something in between. The main characters are very lovable and empathetic. I particularly really loved the character of Henry. He is a grumpy man that stole my heart throughout the book and I can't wait to read more about him. The author bases the book in the City of Charleston and if you've never been there the author does a great job of teleporting you there and making you feel like you've been there your whole life. Tipsy, who is the main character, is empathetic and a badass when it comes to her abilities, even if she doesn't believe in herself.

I rate this book 5 out of 5 stars. Because its book is entertaining and well written. Plus you get an awesome heroine who is vulnerable yet strong at the same time. To be honest I couldn't find much that I didn't like about this book. The author knows how to write a mystery without making it way too dramatic or silly.

I recommend this book for anyone who really likes a good murder mystery with a touch of paranormal. With a good strong woman in the lead, that is empathetic and realistic.

Charleston Green had every facet I was searching for in the gem of a story! I can’t wait to join Tipsy on more clever, ghostly adventures!

A real and deliciously surreal scenario of an emotionally struggling artist mother and her cast of otherworldly character low-country spirits.

LOVED this story and can't wait to start Haint Blue (just ordered for my kindle!). Tipsy is quite the character, as are the other people and souls in this story. I loved her perseverance and attitude, and some of her epiphanies about her divorce really struck home with me. Can't wait to read her next adventure, and will definitely read other books by Stephanie Alexander!

I enjoy these stories quite a bit. I loved the characters, nicely done. I learned about Charleston green, which, along with joggling boards, was something I had to look up, but which added to the charm of the story.

Compelling storyline with different subplots that that keeps the reader’s interest. Descriptive, informative writing that draws the reader into each scene both physically and emotionally. Believable characters with distinct personalities and great banter. Thought-provoking and realistic dialogue.

I may re-read this story and look forward to other works by this author.

Not what I expected. Better.

This was a good read. If you enjoy paranormal stories with a bit of heart then give it a try. I recommend it...

So much for me getting any work done this morning. I had to finish reading this. The author tied me up caring about all the characters including the ghostly ones.

I only caught 2 errors, so that was a bonus. This is very much worth reading.

Love the characters. Flow of story is so smooth. I was hooked on 1st page. I love Charleston. Setting of this story was great. Stayed up til 4AM to finish the book.

If I could give half a star I would. A meandering mess of a book. An awful waste of time

Charleston Green - worth your reading time.

I don’t know why, but I really didn’t expect this book to be this good. Maybe the title or the cover - I don’t know. This book surprised me in a very pleasant way. The characters were developed quite nicely and the book was hard to put down. Highly recommend!!!

I hated to finish this book, it enjoyed it so much. I hope to read more about Tipsy and her artwork

Tipsy was stunned to learn the ghost couple in her house fought and bickered with each other. Promising to solve their deaths proved more difficult than she expected. Her own life had taken a turn as well. Trying to keep her children and earn a living focused her and the ghosts of Jane and Henry provided inspiration and company. Can she help them move on and solve their deaths? Can Tipsy move on with her life as well? A surprise ending.

This book was a fine blend of old and new, love, hate, leading to understanding. A pleasant walk down a small town street, the secret pain being soothed away.

Her (Not So) Perfect Love Match: Opposites-attract sweet, faith-filled romances set in a small-town