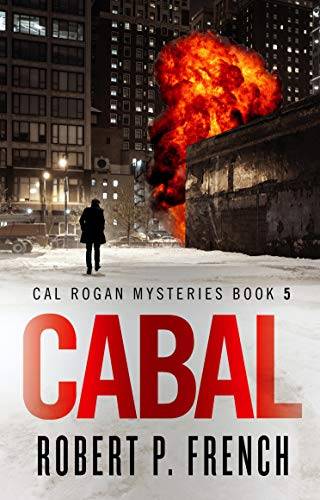 On the same day, two thousand miles apart, a woman dies in a terrorist bombing and a homeless man is beaten to death.

How could their deaths possibly be connected?

Reluctantly, Cal agrees to investigate the homicide of a homeless man, known only as Wily, who was beaten to death on the streets of Vancouver.

Somehow, his investigation triggers the attention of an intelligence officer in the Security Intelligence Service and suddenly Cal and his partner, Nick, find themselves targets.

But targets of whom?

The deeper they dig, the more they are thwarted by a highly efficient but hidden organization.

Follow Cal and Nick from the drug-infested streets to the highest corridors of power, as they uncover a crime that is staggering in its audacity and magnitude.

Get this stunning new addition to the Cal Rogan series now.
Readers are loving Cabal (Cal Rogan Mysteries Book 5):
"...the most fantastical of the books... so much fun that you just buckle up and go along for the ride." Goodreads reviewer, ⭐⭐⭐⭐⭐

"Thanks to the pandemic, I've found several new authors who write exceptionally good books. Mr French is one of them." Goodreads reviewer, ⭐⭐⭐⭐⭐

"Excellent Cal Rogan story in keeping with other books in the series. Fast paced and certainly keeps your interest throughout." Goodreads reviewer, ⭐⭐⭐⭐⭐

"As usual, couldn't put it down. This happens with every Cal Rogan Novel." Gillian P Romain, ⭐⭐⭐⭐⭐

"Highly recommended if you are looking for a good mystery/thriller series." Goodreads reviewer, ⭐⭐⭐⭐⭐

Intermittent Fasting for Women Over 50: The complete Beginner Guide to the Fasting Lifestyle

The Thunder Lord: The de Shera Brotherhood Book One