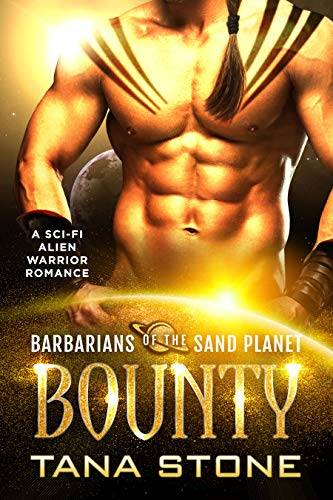 As captain of the galaxy’s only all-female bounty hunter crew, Danica thought she was prepared for anything. She wasn’t expecting him.

Marooned on a sand planet, injured, and separated from her crew, Captain Danica Miller is not having a good day. When she’s rescued from the desert by a huge, gold-skinned alien, she doesn’t know whether to be relieved or to panic. Not only is he clearly a barbarian—a barely-dressed one at that—he seems to be able to read her thoughts. Even worse? She can sense his. And he seems to think she’s his to claim.

The last thing K'alvek wants is a frail creature distracting him from his mission—even if he does feel drawn to her. Then why can’t he stop himself from saving the willful woman and vowing to help her and her crew get off the planet? Especially when what he really wants to do is drag her to his tent and never let her go.

If you like hot alien warriors, strong women, and fated mates romance with a happily ever after, you’ll love BOUNTY, the first book in Tana Stone’s sci-fi romance Barbarians of the Sand Planet series.

Under the Duke's Wicked Spell: A Historical Regency Romance Book

The House that Jack Built: An edge of your seat serial killer thriller

Between the Lawyers: MMF Bisexual Menage Romance (Between Them)