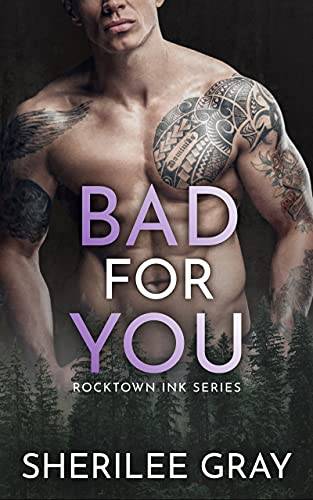 The first time I saw Lila Cooper, I vowed to make her mine.

She was dangerous—those big brown eyes saw far more in me than a biker good with his fists. Far more than I wanted her to see.

But I had to let her go. My screwed-up family destroys everything they touch, and my club sent me to clean up my brother's mess. I couldn't risk Lila getting hurt. So I hurt her instead, the woman who owned my heart.

Now she's determined to forget me. But I'll do anything for a second chance, even reveal the scars on my soul...
Erotica

Definitely an outstanding way to spend a snowy day. I couldn’t put it down. Love the characters and their heat!

[I received a free eBook copy of this title from the author, and have willingly provided an honest review.]

I was so excited when I heard about this book coming out! I'd thought the last chapter, Meant for You, was the end of the line for the Rocktown Ink crew. I was very glad to learn that I was wrong! And Riff was one of those who I was especially concerned about, so it was great to discover what became of him.

I was somewhat confused at the beginning of the book by all of the different names: Lila, Riff, Jesse, Bambi, Grifter. It was all a bit confusing at first.

Watching the relationship develop between Jesse and Lila, two seemingly very different people from totally different walks of life, but who were just made for each other, was delightful. Especially when it was just the two of them together, they really clicked.

However, as is often the case in such situation, there was an awful lot of outside influence that was very seldom condusive to their relationship. This story contained an awful lot of angst and drama, way more sadness than I prefer in my stories. But it was nice to see the somewhat offsetting support that each of the main characters received from their tribes when they needed it. Luckily, their ending was ultimately a happy one, although it took a long, hard road to get there.

I couldn't wait for this story to come out and it didn't disappoint! I couldn't put this one down. Jesse is hands down one of my favorites. The story never dulled and kept me interested. Lila was a perfect blend of sweet and tough, most can't pull that off. Sherilee Gray is becoming one of my go to authors.

The moment he first met Lila Cooper he knew she was too good for the likes of him, but that didn't stop him from going after her. She drew him in like a moth to a flame, and there was no denying the attraction they had for one another. But the more he got to know her, the more guilty he felt about dragging her into his dangerous and sometimes chaotic world. So he let her go, but days after he knew he had made a huge mistake, she was impossible to get over.

Now he is dying to have her back, and be the man lucky enough to have all of her time and attention, but she on the other hand wants nothing to do with the likes of him. He broke her heart and she isn't about to give him a second chance to do it again...

Bad for You was an addictive little page-turner, the moment I met these two I didn't want to let them go. They drew me in, began to sneak into my heart, and had me praying they'd find a way to work things out. It was evident these two were perfect for one another, but with Jesse's lifestyle it made it hard for them to make time for one another. Danger was always lurking, his family was stirring up drama, and the MC made their demands of him too. But he was determined to not let Lila go, so he did his best to make it work, and make her feel like she was important to him. I loved watching these two fall for one another, their story tugged on the heartstrings, made me laugh a few times, and had me swooning like a fool the whole way through... it was perfect from beginning to end! I highly recommend you get your hands on this one, you won't be disappointed with what you find waiting between the pages for you!

I requested an advanced copy of this title from the publisher, and I am voluntarily leaving my honest and unbiased opinion.

This book absolutely SIZZLES!!! The chemistry between Lila and Jesse is to the extreme! The fact that Jesse is one dirty talking biker adds to the heat factor. And yet, this isn’t just one smexy scene after another. It's two people falling in love as they wade through everything life has thrown their way.

Lila, sweet, kind and gentle was so much more than what she appeared on the surface. I love a heroine like her to switch things up sometimes and this was the perfect time. I especially appreciated that she didn’t yield to Jesse after he had messed up and she made him work for it.

While Jesse was resistant to forming a relationship with Lila, he also didn’t want her with anyone else. When he finally got his act together to go for her, he was fierce, determined, protective and wildly jealous.

Both of these characters have quite a bit of baggage from their families that affects the way they not only perceive themselves but that colors their relationships. This contributed to the drama with just a little relationship angst added in.

I don’t recall if the beginning of their relationship is covered in another book, but I missed it being included here. I really like to watch the hero trying to woo his heroine and I would have loved to see Jesse do so with Lila as she was pretty innocent and he was so protective of her.

Overall, this book kept me engaged from the first page. With a fast pace, perfect drama, and scenes that left me in a melted puddle, I read this in one sitting. Definitely recommending this one!

Gah!! I legit die for Sherilee Gray's stories. They are ALWAYS sexy, uber-hot and filled to the brim with great banter and a strong emotional connection. I was excited to see we were getting Jesse and Lila's story as their chemistry was so super sexy in Dane and Everly's book. And in Bad For You, Gray hit it right on the head and then some! The good girl librarian and the sexy bad boy biker were FIRE. I loved everything about this story and could not stop reading!

Gah!! This story was phenomenal. It was the perfect combination of dirty and sweet! I loved Lila's sass and attitude when she came into her own and how she gave Jesse as good as she got. She made that man run in circles when he realized she was it for him and I for one was here for it. Their chemistry and passion was HOT! and I loved how great they were together. It was fantastic seeing all of Rocktown's familiar faces and now I can't wait for more! 4.5 stars! ~Ratula

I loved Lila and Jesse! This is such a fantastic series!

Bad For You is book four in the Rocktown Ink series by Sherilee Gray. Sherilee’s books get me every single time. I don’t think there has ever been a time when I haven’t finished the final page with my heart still wanting more. For the book to NOT be over yet! This is Lila and Jesse’s story.

Lila Cooper is twenty three years old and is the town librarian in Rocktown. Lila escaped a life of condescension, manipulation and constant berating by her parents until she got brave and left. She is still adjusting, trying to build up her self confidence. Lila has had a huge crush on Jesse since the first time she saw him. They spent some time together but then he suddenly ended things. Now Lila has heard that Jesse is going out of town. She has one more chance to let him know how she really feels and she’s going to take it.

Jesse (Grifter) Thomas is the enforcer for the Ramblers MC. The club is Jesse’s family because his own father and brother certainly aren’t. Jesse has had a huge thing for the sweet librarian since they first met. But he knows he can’t bring her into his life. He can never be good enough for her. So, he tries to stay away. Key word here is tries!

Jesse can’t do it. He can’t walk away from her. No woman has ever made him feel this way. But will she give him another chance? Because he’ll do whatever it takes to prove to her that he can be the right man for her.

Jesse has a dark past, a past that isn’t ready to let go of him yet. As he and Lila are trying to explore their feelings for each other, there is someone else who wants things and will do whatever it takes to get them. No matter who he hurts.

I’ve loved this series since the first book and this one was no exception. I loved both Lila and Jesse. I especially loved the way they built each other up. They made each other feel accepted, loved, cherished, like no one had in their own lives. This is a very steamy, sexy, sweet and just plain enjoyable read. I’m not sure what Sherilee is working on next but whatever it is, I’m in!

Rescued By the Captain