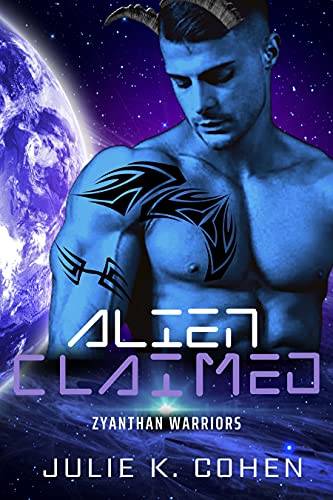 The blue horned alien says he won’t touch me. What if I want him to?
Ivy
Earth isn’t exactly paradise, not since the Coalition took control, but it was home... until Ivy’s brother shoved her on an alien ship to be a mail-order bride. The truth be told, she is better off without the murderous psycho, but that doesn’t mean she wanted to be thrust into the universe, totally unprepared, and she certainly won’t marry some horned alien.
She’ll make her own way back to Earth and stay far away from her brother and his criminal ties. Nothing will change her mind.  Not even a tall, sweet, protective warrior who makes human males look like boys and the universe look much more appealing than she ever thought possible.
Quinnov
Quinnov’s alone in the universe.  Except for his planet... war torn, burned out Zyan.  No one in his family survived the war, except maybe his older brother Jaizon. Quinnov’s been searching for him since the war ended.  But when he crosses paths with his heartmate, his priorities shift.  To keep her safe from those hunting her, he may have to return her to her world, even though she makes his heart soar and both of his cocks harden.* * *A Warrior For Every Bride
Alien Captured is a steamy Mail-Order Bride Romance with several twists. Each book in the series ends in a very Happy Ever After.
Science Fiction Romance Alien Invasion Science Fiction eBooks First Contact Science Fiction eBooks