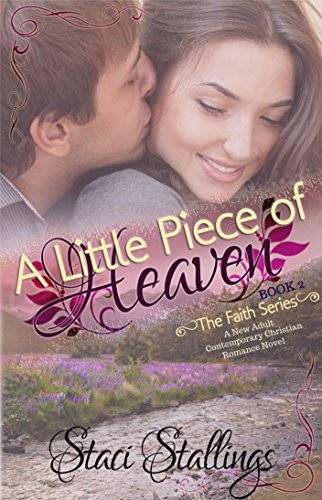 Jeremy Stratton thought he had it all figured out—great apartment, live-in fiancée, soon-to-be degree, and favored son status in a well-heeled family. But when it all came crashing down, he nearly drove his friends away as well. Starting over now, his life is about to change in ways he never could have foreseen and would never have chosen on his own. Can Jeremy find “A Little Piece of Heaven” he never even knew existed?

Emily Vasquez has found one thing to hold onto in the swirls of life—God, and she has no desire to let Him go in pursuit of some guy. But when Jeremy keeps coming around despite his on-again, off-again aversion to all things Christian, Emily finds it’s not so easy to shut her feelings off as she thought it would be. Even worse, falling for him would mean never getting the chance to set things right back home. Choices, mistakes and consequences battle it out as the two of them search for A Little Piece of Heaven.

A New Adult Contemporary Christian Romance Novel, A LITTLE PIECE OF HEAVEN, asks the question what if everything you’ve learned in life turns out to mean something you never expected? These two friends must battle old demons, new life issues, and each other to realize that love can be found in some very unexpected places. Set in a college, A LITTLE PIECE OF HEAVEN picks up where the new adult romance A WORK IN PROGRESS left off, taking you through twists and turns in a heart-stopping ride that ultimately leads right where these two were always meant to be.

“Oh, man! Tell me we’re almost there.” At the threshold Emily resorted to turning around and pushing the box with her back.

“Over here by the wall,” Jeremy said, guiding it the final ten feet. “And. We’re. There.”

The moment he stopped, she gave up and slid all the way down the box to the floor. “Hallelujah! Oh, man. I should have asked for hazard pay.”

“What’re you doing sitting around?” Rebecca asked as she breezed in the door with a box the size two pairs of shoes would fit into. She walked over to the counter in the kitchen and set it down with a clank.

“You’re kidding, right?” Emily was exhausted. She put her hand to her head to get it to stop swimming from the over-exertion. The thought of the fifteen other boxes of stuff not to mention some of the furniture still sitting back in the other apartment threatened to dissolve the last of her will. “You told me this wasn’t going to be hard.”

Rebecca shrugged. “It’s moving. It’s always hard.” With that she breezed back out.

“Come on.” Jeremy reached down for her hand and pulled her to her feet. “I promise, I’ll give you the light one this time.”

“Oh that you would be so kind.” Emily reached down and pulled her purple jersey shirt over her jeans where it had come up. The high ponytail on her head swung in time with her feet as she followed him down the hall. “How in the world can two bachelors have so much stuff? I thought bachelors like ate off of paper plates and slept on the couch.”

Jeremy glanced at her with a look of horror at the very suggestion. “I’m a bachelor. I’m not poor.”

“Oh,” she said, taking the statement to mean poor was like being a leper. Instinctively her arms twisted around her. “Well, I for one wish you were a little poorer.”

The gaze he trained on her held complete derision, but she smiled at him teasingly. “Not so much stuff to move that way.”

“Ah.” He lifted his chin in understanding although he still didn’t look very happy.

Sensing she’d just sent the train flying off the track, Emily followed him into the old apartment and planted her hands on her hips. “Okay, gang. What’s next?” The sooner they got this done, the sooner she could get back to normal.

Shadowed Rubies: A small-town romance featuring a doctor and a firefighter

AFTER THE FALL: Book 2 in the Silver Sisters Series - Beth's Story