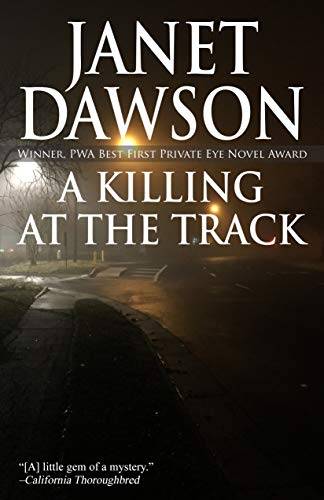 THE LURE OF THE TRACK, A RIDE ON THE WILD SIDE, AND DANGER AT EVERY TURN…"This little gem of a mystery centers around murder, mayhem and race-fixing at a fictional racetrack ... Dawson, a longtime racing fan, has really done her homework well... " --California Thoroughbred

Intrepid Jeri Howard, Janet Dawson’s savvy female private eye, steps into the Winner’s Circle in Dawson's NINTH action-packed mystery, set almost entirely at a track seething with intrigue. Author Dawson takes us to the fascinating and forbidden backside, where you practically need a hotwalker for the humans, as owners fret, jockeys throw fits, and vets sweat to hold overworked horses together with duct tape.

Overworked is a hazard of the job, but “injured” can result in lost fortunes or death—and not just death for horses, as Jeri soon finds out. You don't have to be a detective to know that if it's a track, there’s always a bad actor out there, looking to make a killing the easy way. And if they have to kill to do it, our intrepid PI’s not going to rest until the desperation stakes.

So here’s how it goes—one dead jockey, then two dead jockeys, three exotic poisons, and several possible payoffs—Jeri’s positively in a lather! But you can wager she’s going to show her stuff in the stretch and take home the purse. (She’s reliable that way.)

Dawson’s complex plot is a pleasure, but the rich backside lore makes this one a sure thing. When you can practically feel the breeze as the horses sweep by, you know you can't lose!

Dick Francis fans will be in heaven, as well as lovers of women sleuths of all kinds, but especially female private investigators like Sue Grafton’s Kinsey Millhone, Linda Barnes’ Carlotta Carlyle and Marcia Muller’s Sharon McCone.

“I don’t know how much Janet Dawson knew about racing before writing A Killing at the Track but she makes you feel as though she’s gotten up at dawn to watch the horses work out all her life. She makes the most of her setting and peoples her story with wonderful characters. Highly recommended.” --Sally Powers, I Love A Mystery

The Vegan "Beef" Guide: All the Answers to Win Every Argument About Veganism You Will Ever Need