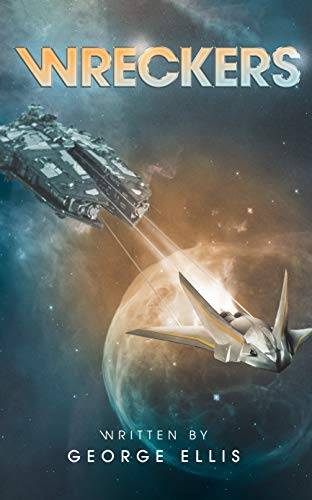 A teenage wrecker is forced to steal the hottest tech in the verse. What could possibly go wrong?

At 19 years old, Denver Boyd is the youngest hauler in space. His ship is the legendary Mustang 1, named and fashioned after the muscle cars of old. His only companions? His one-eyed cat Pirate and an AI navigator named Gary based on classic 21st century sitcom personalities.

That all changes when Denver meets Batista, a mechanic who claims to know what happened to Denver’s missing father and brother.

Following her information, Denver is drawn into trouble with the worst people the galaxy has to offer — bandits, feds and rival wreckers. As complications mount and he’s forced into helping different sides chase a mysterious prize, Denver, once a lone wolf, collects the small crew he never knew he needed. But can he keep them alive?This thrilling story is full of action and attitude. If you like space operas and sci-fi romps, Wreckers is the perfect blend of action and levity for you.This is the first in a series of three novels, with book two coming in late 2021.
Space Opera Science Fiction Space Fleet Science Fiction eBooks First Contact Science Fiction eBooks

Cabal: A Totally Unputdownable Political Thriller with an Exciting Twist