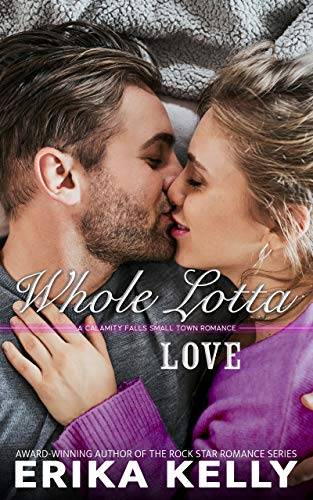 Sparks fly when opposites are forced to live together in this steamy, small town romance standalone!

The moment Lulu lost her job running the fanciest restaurant on Maui, the chef threw herself into recovery mode. She's pitched a cooking show to be filmed in her Wyoming hometown, hoping the on-screen visibility will pave the path for a future chef de cuisine job.

An injury sidelined the quarterback’s promising career, but Xander is determined to find his way back to the gridiron. Rehabbing at a world famous clinic in Calamity, Wyoming, he’s approached by a producer to host a new cooking show. Having grown up in his mother’s restaurant, he grabs the opportunity to stay in the public’s eye.

Lulu nails her audition, but before she can pop open the champagne, the producers drop a bombshell: they're giving her a co-host. Sparks fly when Lulu and Xander compete for the spotlight. And when a tight filming schedule forces them together around the clock, their sizzling chemistry starts a blaze that can’t be quenched. Will it lead to success for both, or will one of them get burned?

Heat so hot even the kitchen can’t stand it.

How to Draw Something Easy and Cute Step by Step: 160 Cute Things to Draw for Your Best Friend (Learn to Write and Draw for Kids)