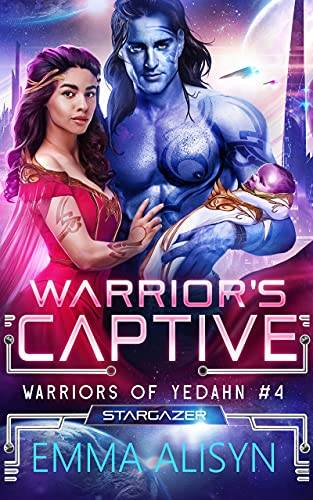 Abducted. Knocked up. A royal alien warrior ruthlessly hunts down his mate's enemies. A new mother discovers the power of her bonding marks—and the strength to fight back.

One minute Vivian is walking home from a rally. The next, she wakes up in a cell to be bred by an alien warrior.

Only the warrior picked to be her baby daddy is an undercover royal guard, and when he rescues Viv, it’s only to claim her as his mate.

But the traffickers want her and the baby back.

Her warrior mate has other ideas. He will keep what he has claimed.

Warrior’s Captive is a genetic fated mates, steamy slow burn surprise pregnancy romance with a HEA. Book 4 in the Warriors of Yedahn series.

Download now because you love action on distant planets, high tech alien civilizations, heroines who start off as damsels but end up taking no prisoners, and warriors not afraid to kill for what they claim.

Really enjoyed this story. The action is great. The mystery of who did what was good too. Story kept my interest.

To Trust a Duke

All That Was Left Unsaid

Lost without You: A Single Dad Small Town Romance