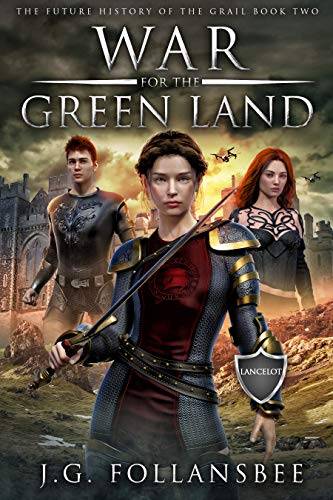 Red-haired questing knight Sir Percival and ailing King Arturus, both of the Green Land, are captured after the Battle of the River Colum and face slavery in the Lucian Empire. Victorious General Robert Dardarius forces thousands of Viridian captives on a death march to the Lucian capital, but he offers Arturus a deal: Turn over information about the Viridian Grail, and he will stop his invasion of Viridiae and its capital, Camelot. Merlin appears in the Lucian capital with something better, a second Grail. Percival, Arturus, and Merlin escape the Lucians, but when they reach the reorganized Viridian army under Mordred Lothian, a new battle with the Lucians takes shape. Will Percival restore the true Grail to the Green Land and face down the Lucian threat? And how will Queen Guinevere, on a mission with Percival's artist sister Dee, help her country?

War for the Green Land, the second novel in the fantasy series The Future History of the Grail, re-imagines the King Arthur legends, placing them a thousand years in the future. The first and third books are Fall of the Green Land and Return to the Green Land.

Dead Witch on a Bridge

A Slaying in the Orchard: A Danger Cove Farmers' Market Mystery