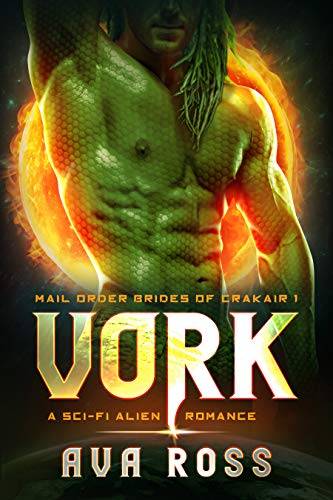 He’s cocky, seven-feet-tall, scaly, & green.
She’s been burned in the past.
Can an alien & human woman find true love together?

Burned by an ex, the last thing Evie wants is a husband, especially a seven-foot-tall, scaled, green-skinned alien. But when she applies to the Extraterrestrial Matchmaking Service on a dare, she’s paired with Vork. He’s big and dangerous, and he hits all her buttons. Passion sparks between them, but does she dare trust this sexy alien with her heart?

As a career spacefleet commander, the last thing Vork has time for is a mate. But after a mix-up, he’s matched with a human female. He decides he’ll produce a child with her, and then get back to his life in the stars. Until he touches Evie and a matebond flares on his palm. When a rival warlord challenges Vork and Evie is the prize, Vork will have to decide: Give Evie up or battle to the death to claim her as his bride.

A good read. A nice start to a series.
Vork was an interesting character and easy to like.
I found Evie to be extremely foolish and naive. I had a hard time with her personality.
Book is worth reading, will plan on reading the next one to see how the story continues.

i normally don’t have too high of standards when it comes to the smutty himbo alien reads but it was actually hard to get through this one. the writing felt a little off and the story progressed super fast in the beginning. i do think that it could have been better if the characters were a bit more complex and strayed less from their original personalities in the beginning. i felt like vork was wayyy too willing to give up
something he’d work so hard for (within the first 24 hours lol) and the conversations between the characters felt a bit unlike their age? idk i’ll give the next book a try but personally i didn’t like this one too much.

also i feel like the scenes in the story could have used more descriptive words rather than explaining the characters thoughts as much as they did. i felt like a lot of scenes missed out on some essential shaping and it left me unsure of what exactly was going on sometimes, for example the whole first scene with that duel challenge. i had to read that part a few times to even have an inkling of what was going on and even then, it wasn’t as clear as it could have been.

Interesting enough, but choppy to read.

Instalove amongst the moons

Who wouldn't fall in love with their very own 7' green alien with some extra bonus appendages that help with foreplay? I found this sci fi read to be filled with humor and instaheat between Vork and Evie. The language difference at the beginning was comical. Evie has registered for a mail order bride exchange with Vorks planet. A year before a deadly virus killed most of the men on earth and the women on Crakair. Vorks mother was the one who entered him into the selection and was matched to Evie before meeting her he was really not going to give her a chance because he was more interested in his military career. That all changed as soon as they met He admits that this time his mother was right because Evie is everything he didn't know that he wanted. I liked the progression of their relationship and the little twists that could have torn them apart. Overall this was a quick read that was just what I needed.

Heartfelt and steamy, I loved getting lost in this world. More please !

Shriek if you love Vork!

This was cute, humorous, lighthearted, and three dimensional all in one. Oh, and relatable in some ways.

My only complaint is that there wasn't more mention of See-lass!

Instead of the aliens being the only one with lack of potential mates, the virus killed many human males.

For the most part I enjoyed this story. Felt like some parts needed clarification. Like:
Was the virus that killed females on other planets the same as the one that killed males on earth.
What was up with her ex? Was her husband or Lover. Was he a stalker? Why the heck would he care now that he had so many human women wo males. Would be set up for poly marriages.

Why the heck would they have narrow floating platforms, and homes at very high levels only reachable by air cars.
And why the heck was the the high ranking human woman, not on a welcome committee. Set up what a human would eat, dress, etc prior to arrival.

Last thing should have left out the dual, vendetta part of story.
Did not add anything to story.
Her finding out about video was enough dramatic relationship part.

Simple and sweet just how I like my love stories. I will read the whole series, and enjoy every minute.

I love a good SciFi romance and Vork met and then exceeded everyone of my expectations. There were moments where I just had to laugh out loud especially with the malfunctioning translators. The characters are simply flawlessly crafted and Vork and Evie’s story kept me captivated from start to finish. There is passion and danger and whilst humans are not entirely welcome yet they are slowly making their presence felt.

Survive The Night: EMP Survival in a Powerless World