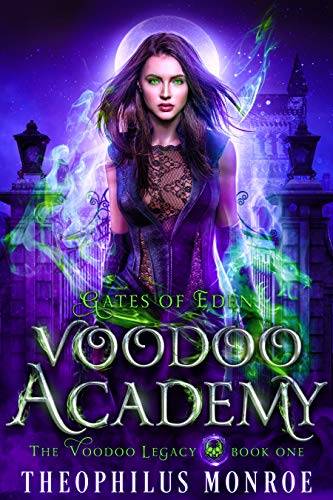 Being possessed has its advantages…Annabelle Mulledy survived a Voodoo attack on her family as a child—but it left her possessed by the spirit of a nearly 200 year-old-girl. This girl, however, came with strange abilities bestowed upon her in the after life. When Kalfu, an evil Loa, discovers Annabelle he hopes to use her abilities to his advantage—to escape the spiritual realm and take a corporeal form. When Ogoun, the Loa of War, intervenes he recruits Annabelle to join him as a student at the Voodoo Academy. Will Annabelle master the arts, and fend off Kalfu’s spiritual assaults? Or, is she ultimately a puppet in a battle between Voodoo demigods? Voodoo Academy is the first book in the Gates of Eden: The Voodoo Legacy series. Theophilus Monroe’s Annabelle Mulledy is a snarky badass heroine with attitude. Monroe draws on the legend and myth of Voodoo lore in a way that neither caricatures the arts as “demonic” nor glosses over the dark side of the Voodoo tradition. With dark magic, dragons, vampires, and a slow burn academy romance the Gates of Eden: The Voodoo Legacy series has something for everybody.If you enjoy magic academy fantasy books and occult urban fantasy, especially books with a dark twist, then you will love Theophilus Monroe’s Voodoo Academy.  Fans of authors like Michael Anderle, Shayne Silvers, G.K. DeRosa, or Ramy Vance will love this compelling coming of age urban fantasy. Pick up your copy today!

Five in a Row