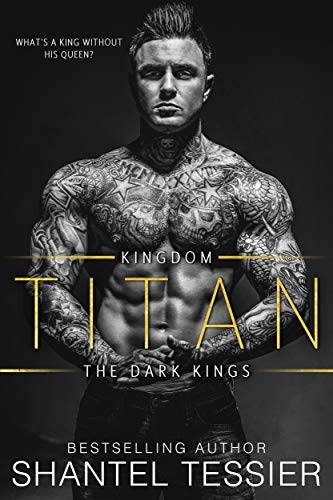 TITAN
I know I have a black soul. Bloodshed and danger are what I live for.
A King is supposed to rule his Kingdom using any means necessary to demand respect.
I’m not a weak man… A King kneels to no one.
I’ve only ever cared about one other person in my life, but the thing is, she never belonged to me. And before I could tell her how I felt, she left.
Now she’s returned, needing someone to save her.
Emilee York was always meant to be mine, and I’ll see to it that happens. I always get what I want, even if that means I have to take it.
And she’s no different. She’ll be my queen, one way or the other.

EMILEE
When I left Sin City behind me, I had no plans to return. I avoided everyone, even my friends, to stay in my bubble. I’ve always been the kind to pull away and run when things get difficult.
But one phone call changed everything, and I was racing back. If only I had known what was waiting for me.
Titan reappeared like a ghost haunting me.
One look and I knew he recognized me. I never forgot him or what we shared. Those feelings that no one else knew existed between us.
I ignored them back then, but now they are more intense than ever.
“Get on your knees…” He demanded I kneel for him.
I tried to act like he didn’t affect me, but he knew. He remembered the way I reacted when he would touch me. And just like he was taught to do—he used my weaknesses against me.
He staked his claim, and I became his queen to use how he saw fit.
What makes it worse is that I crave him, and when I kneeled, it was willingly.
But was it for nothing? (less)

TITAN is the first book in the Dark Kings Series and can be read as a standalone. Due to mature content and themes this book is recommended for readers aged eighteen and over. This novel may contain triggers.
Organized Crime Family Life Fiction Coming of Age Fiction

So much to unpack here!

So much to unpack here! I’ll admit – at the beginning of this book I was a little lost and confused at what was going on, but as things start to unfold, it all started to make sense and I was immediately enthralled in what was happening! Emilee has returned home earlier than expected due to the death of her father, while originally intending to move home for her dying mother. Upon arrival, she finds out that nothing was as it seemed in her home life after being told that her parents have been divorced for years and his creepy business partner oversees all the finances – not to mention he’s now married to her mom! While reconnecting with old friends, she runs into the “Kings” that she didn’t end on good terms with in the past. Even though Titan’s best friend was the one who used to hook up with her, he’s always had a thing for Emilee, and the stars have aligned to get her into his graces and finally go after what he’s always wanted – her. As the storyline starts to unfold, we the readers find out that things aren’t really what they ever seemed and that there was so much going on behind the scenes that after all the secrets are exposed, I was on the edge of my seat with wide eyes! In the end, Emilee goes through some stuff but comes out on the other side with Titan supporting her. This book has me hooked, much like Shantel’s other series, and I can’t wait to dive into this new one!

Emilee and Titan have been fighting attraction for years. When Emilee experiences tragedy, she needs help and Titan is there for her. Could this be their chance? When secrets are revealed how will that effect them?

Blurb: “A King is supposed to rule his Kingdom using any means necessary to demand respect.”
Sum up of the Book:
Titan is the first in The Dark Kings....Titan, Bones, Grave and Cross. As this book focuses on Titan as the MMC, he is the “King'' that runs the “Queens” which is an escort service that caters to high society. The FMC is Emilee, a girl from their past that is back into their lives due to hard decisions. But she is willing to do what she needs to and become self-reliant.

Review:
Wow, this is my first read of Shantel Tessier's work. As a “new to me” author you never know what you are getting, and I like to go in blind (without reading reviews). I have to say I was very impressed. Shantel really gave these characters life with true depth, grit and steam! These “Kings” are all kinds of hot and just the kind of bad boy book-boyfriend you want.

Dark and gritty, I need more

Recommended For; those who love dark, gritty, and steamy, with a perfect blend of romance and angst.

First my usual points :
-> I do not do spoilers unless warned.
-> Read the summary above; it will tell you what the book is about.
-> Titan is the first book in the Dark Kings Series. They can each be read as standalones.
-> The author was not new to me.

Notes/Opinion (personal):
Shantel Tessier is one of my favorite authors and each time I read one of her books, I fall more in love! With that being said...

We meet Emilee and Titan in Titan (Dark Kings, #1) and you can't just help but fall in love with how their relationship blooms. There is so much steamy angst within the pages, you get hooked. I was committed after the first chapter and I didn't stop till it was finished.

I am voluntarily reviewing an advance complimentary copy of this book. The opinions expressed are my own and I have not been compensated for this review.

Love isn’t always neatly packaged. It is beautifully dark for some . Emilee and Titan’s story is difficult at times, but it is love .

Now, there are some parts of this book that don’t really sit well with me but I’m a big girl and I know how to skim so not to absorb those disturbing parts. Titan and Emilee are just twisted but in a normal for them kinda way. Throw in some Bones and it’s all kinds of freaky. But no matter how it end those men love her and will do everything to protect her and they do. In the end though, through all the lose and betrayal “King” Titan get his Queen.

Utterly phenomenal! Dark, delicious, page turning, steam, chemistry and all around good! Diving into the next book.

I absolutely love Titan and Emilees story!! I was completely absorbed into their world and couldn't stop reading.

Blessed Arrangements: A Small Town Story of Friendship and Romance