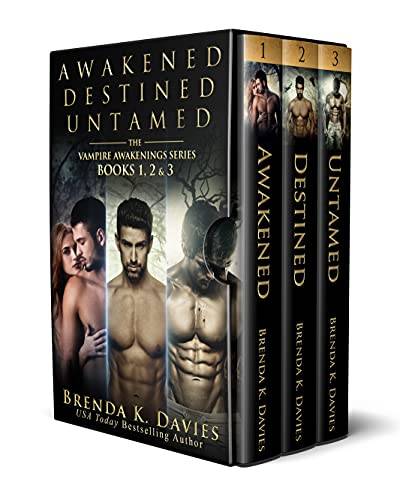 The first three books in the USA Today Bestselling SeriesBook 1: AwakenedTraumatized by her past, Sera spent the last three years at college hiding from the world. She’s content to stay locked away until a chance encounter with Liam changes her life. Though she’s frightened by the powerful emotions he awakens in her, Sera finds herself opening up to him more every day.Harboring a dark and deadly secret, Liam knows he should stay away from Sera. His world is dangerous for her, but he can’t deny the irresistible draw he feels. However, when Sera’s past comes crashing into the present, Liam is forced to expose his secret to save her.Is their growing love strong enough to survive the savagery of Liam’s world, or will they be torn apart forever?Book 2: DestinedDetermined not to live her parents’ fate as a mated vampire, Isabelle locks herself away from society. Despite her resolve to avoid anyone outside her family, her world is rocked when Stefan arrives. The powerful, stunning vampire is everything she never wanted.Stefan isn't expecting to walk into a nest full of vampires, but he’s immediately drawn to the vibrant, defiant, and willful Isabelle who goes out of her way to avoid him.No matter how hard she tries to fight it, Isabelle can’t deny the pull she feels toward Stefan. Just as she starts to let down her guard, Stefan’s lethal past catches up to him and threatens to destroy the life Isabelle worked so hard to protect.Will Isabelle and Stefan overcome their differences in time to face the looming danger, or will they lose each other when the past collides with the present?Book 3: UntamedEthan has spent his entire life hiding violent urges from his family. They think he’s just antisocial; what they don’t know is he struggles every day against his growing desire to kill. Hoping a change of scenery will help, he escapes to Bermuda to join Isabelle and Stefan.He’s not expecting Emma to walk into his life and give him the first peace he’s known in years. However, the solace he finds with her is soon shattered when someone from Emma’s past returns to claim her. When Emma’s life is threatened, Ethan realizes the only way to protect her is to give in to the brutal nature he’s fought so hard to contain.Is the promise of eternity with Emma enough to save him from the demon within, or will he be lost to his savage nature forever?***Due to sexual content, violence, and language, this book is recommended for readers 18+ years of age.***

Charmed by the Cowboy: A Contemporary Christian Romance

Mark Twain: A Life From Beginning to End (Biographies of American Authors)