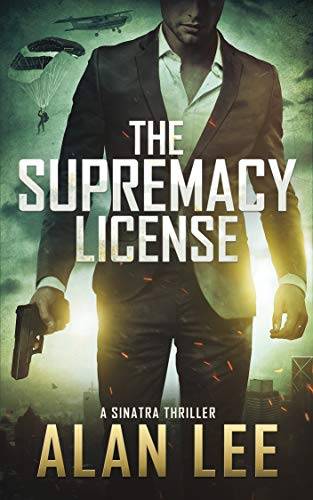 Sinatra, a notorious federal marshal, is drafted into a black ops group. Their mission--arrest the untouchable on American soil. And don't let the press find out.

An international terrorist slips through the East Coast and takes up residence inside an impregnable mountain chateau--within American borders but beyond legal reach. Her name is El Gato and she's a top priority for both the DEA and FBI.

The situation is dicey and politically explosive, perfect for Sinatra. Sometimes a scythe works better than a hammer.

But Sinatra doesn't realize the dangerous waters into which he wades. This terrorist holds the key to his past and his future. He and the mysterious El Gato have tangled before...

If you like books about James Bond, Jason Bourne, or Jack Reacher, you're going to love Sinatra.

This has some very strong characters and there are several unexpected plot twists. It is one of those books you’ll find hard to put down once you get started reading it. I look forward to reading more of the Sinatra books!

The hero is eother a crook or a great guy. He is finnu personable and has some great quips
Definitely wort reading

Manny has class! Manny has an ego!!! And his ego works full-time to keep up with how good he really is! This series is a great complement to the Mac August series. Both are the kind of books that are hard to put down…

U.S. Deputy Marshal Manuel "Manny" Martinez - good friend of Makenzie August, P.I. - is recruited for a black ops mission. Despite a personal aspect - part of the reason for his being recruited - Manny takes the assignment. Flashbacks occur, complicating his efforts.
Two thumbs up!

THE SUPREMACY LICENSE is a great way to start a new series. It’s raw, violent, poignant at times, but angry throughout.

It’s a great read and a well written book.

Totally love this new character! I reccommend t this wonderful series, and already started the next book! Actually, I bought all four, and hope there will be more!

Had me until Manny jumped

You do not jump from one air plane onto another air plane while both are in the air.. Wind would rip you every which way. I enjoyed the book otherwise. Maybe could tame down the macho. It would be a little more real with less superman.

Actually read the second book first and couldn’t wait to read the first one. Totally fun twisty turn read. Now I need to search for number 3. Yes, an author to follow for years to come.

This would have gotten a 5-star for the great excitement moving from one scene to another with enjoyable characters; however, Lee made the fatal mistake some authors occasionally do: writing a action scenes about airplanes of which he is clueless, having them and characters do ridiculously impossible things! Please, Lee, get a knowledgeable person to read over those scenes and make them real; it's a bit more work but without it, any enjoyment dissipated.

You can’t help but like Manny. He’s good looking, is a sharp dresser, is an MMA fighter and did I forget to say he’s good looking? The problem as I see it, you can’t make a movie of these adventures—who would be able to play him? Can’t think of anyone that handsome. But I can still picture him as written. Great job!

This author is impressed by big words. Example: In conversation an FBI agent uses the word "aforementioned." Should read a little Hemingway or Lee Child. Stopped. Quit.

With all the best attributes; handsome, smart, creative, caring, strong, multi talented. Ability to surprise. Simple code for living his best. Strong principles and can be vulnerable. Looking forward to the next book and what new problems he tackles.