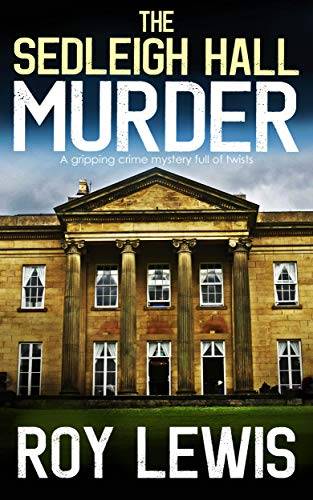 Looking for a classic murder mystery from an acclaimed crime writer?

Discover Eric Ward, policeman turned lawyer. Enjoy a beautifully told story from a time before smart phones and DNA testing. Full of twists and turns, this will have you gripped from start to finish.

Please note this book was first published as A CERTAIN BLINDNESS

“Jolly good reading with a protagonist you’ll like.” Chicago Tribune

“Lewis skillfully ties up everything . . . smoothly written. Compassionate yet with plenty of force.” New York Times

“Well devised and moving. Lewis excels with a certain type of anti-hero, beset with problems, no longer young.” Financial Times

“Lewis at his well-rooted best in this drama of bent solicitors and corrupt businessmen living high in the North East. Well worked out investigation, excellent characterisation and a tense climax against Northumbrian scenery. Highly recommended.” Sunday Telegraph

A SUSPICIOUS DEATH AND A LARGE INHERITANCE WITHOUT ANYONE TO RECEIVE IT.

Eric Ward thinks there is something odd about Arthur Egan's life and death. But Ward is a former police inspector, and trained to be suspicious.

Egan left a large sum. But Ward makes no progress tracing the dead man's offspring. A photograph of an unknown tombstone is his only clue.

He discovers Egan served a term for manslaughter, and that the evidence against him may have been planted. Why had he accepted his fate so meekly?

Despite warnings that he is wasting the firm's time, Ward persists in his investigations.

AND HIS PERSISTENCE LEADS TO MURDER.

And by the time he realizes why, he finds his life and career are both at risk.

AND WHAT IS THE CONNECTION TO LORD MORCOMB AT SEDLEIGH HALL?

This fast-paced mystery will have you enthralled from the start. Set in England in the late 1970s, this is the first book to feature Eric Ward. More coming soon.

DISCOVER YOUR NEXT FAVOURITE MYSTERY WRITER

THE DETECTIVE
Eric Ward is forced to retire from the police when he discovers he suffers from glaucoma but qualifies as a solicitor (lawyer) and sets up his practice on the Quayside in Newcastle, where he deals with the seamier side of the law. When he marries a wealthy young woman she attempts to persuade him to settle in Northumberland and work with wealthier clients but he stubbornly refuses to give up his criminal practice in Newcastle. Although she draws him into the world of high finance he still insists on continuing at the Quayside—which causes tensions within his marriage, and lead to fatal consequences.

Roy Lewis is one of the most critically acclaimed crime writers of his generation.

INSPECTOR CROW BOOKS
Book 1: A LOVER TOO MANY
Book 2: ERROR OF JUDGMENT
Book 3: THE WOODS MURDER
Book 4: MURDER FOR MONEY
Book 5: MURDER IN THE MINE
Book 6: A COTSWOLDS MURDER
Book 7: A FOX HUNTING MURDER
Book 8: A DARTMOOR MURDER

The Fulcrum: A Rex Dalton Thriller