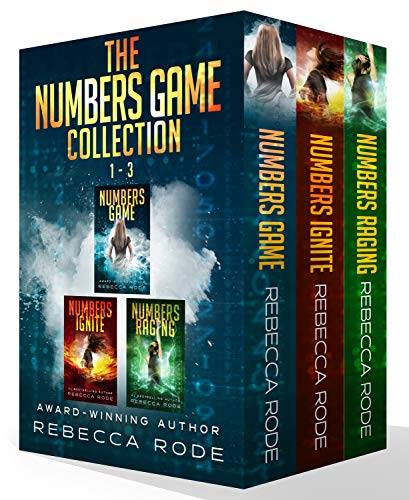 THE FIRST THREE NUMBERS GAME BOOKS - IN ONE BOXED SET!

In futuristic America, everyone wears a number. Treena's as ready for Rating Day as anyone can be - she's a top contender in Level Three school and has a highly-rated boyfriend. But when her number is announced, it shocks everyone.

To get her life and boyfriend back, Treena must go undercover and expose a military spy. Doesn't sound too hard, except that someone wants her dead. And then there's Vance, the mysterious soldier with a haunted past and gorgeous brown eyes. Together, they discover a dark numbers conspiracy, one that shatters the nation's future. Treena must join up with Vance if she is to survive the dangerous game of numbers - and the terrible war that rages within her heart.

After Treena’s disastrous attempt to unite the nation, she has the deaths of hundreds haunting her dreams. Now, with hatred and accusations following her past the border, she’s determined to leave that horrible day behind and find a peaceful, uneventful life with Vance and the settlers. But when she starts seeing mysterious figures hiding in the abandoned cities at night and uncovers a strange desert population, she realizes there’s a danger much greater than NORA to worry about—and she just abandoned her people to their fate.

Vance is a prisoner. Being rejected by the girl he loves and put on trial for betraying his clan are bad enough, but now he’s been framed for a crime he never committed. Their less-than-perfect refuge has become the political game of a madman, and Vance is the only one who can stop it—if he can keep from being executed first.

Treena and Vance are still very much in the game, and this time it will take everything they have to save those they love.

It’s been ten weeks since Treena returned to NORA. The council has rejected her war preparations at every turn and Dresden is backpedaling on his promises. Treena’s secret followers push her to unseat Dresden and take control—something she refuses to consider now with NORA on the brink of war.

Vance has his own set of troubles. Drought has made his settlement’s future bleak and infighting has begun. Joining NORA seems inevitable, but Vance refuses to give in—not if it means putting his younger sisters and his people in danger. Then Treena asks him to join her at the peace convention overseas, forcing Vance to choose between his responsibilities and his heart.

Finally together, Treena and Vance must navigate the political undercurrents of a strange new country, stay together despite their enemies’ determination to tear them apart, and convince an indifferent world to help them fight the most powerful and deadly foe they’ve faced yet.
EXPERIENCE THIS THRILLING SERIES WITH A SINGLE CLICK NOW.