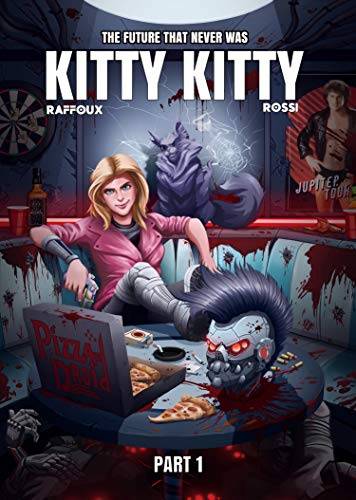 Join sassy space cat Lee and his Desert Eagle-toting, soda-swigging human partner, Ali, in a future that never was. Board the dynamic duo’s ship, the mythical Kitty, as they bounty-hunt their way through a solar system where the Soviets got to the Moon first; where space is a lawless void; where cats talk and pizza comes in a can. It’s an alternate history as only the 80s could have built it—so lock and load and shout Cowabunga! because it’s crime-fightin’ time!
---
"The future that never was" is an action-driven science-fiction book series borrowing from different sub-genres such as space opera, space western, cassette futurism and cyberpunk. Its first story, KITTY KITTY, focuses on a unique and deeply retro universe. Because, in this uchronia, the Soviets planted the Red Flag on the Moon in 1955. Since then, mankind has relentlessly pushed its colonies to the ends of the solar system. It devotes all its scientific and industrial resources to it. Thereby, its cultural codes seem frozen in some alternative 1980s where Floppy disks are kings and David Hasselhoff is the ultimate galactic superstar; robots do all the work and the packs of cigarettes are cheaper than ever! Yet, as humanity is expanding through the Kuiper Belt and the New Worlds, the overly consumerist society is slowly collapsing because of the never-ending corpo-wars and the blatant technocratic corruption.

★★★★★ ''Picaresque cyberpunk with cats? What is there not to love about this!'' (Publius Decius Mus – Royal Road)

★★★★★ ''If you love wacky space hijinks with characters that are one part badass, one part mess but fully awesome nonetheless, then this series is well worth your time!'' (Ben Arisson – Royal Road)

★★★★★ ''The dialogues were witty, funny, and the world was unique and lively, perfectly capturing what the last frontier could be if we ever finally get space travel.'' (Louis Bulaong - Royal Road)

So… what are you waiting for? Dive into this strange future of punks cyborgs and flying shiny Chryslers! Bloody, irreverent but always hilarious, The future that never was' KITTY KITTY will allow you no respite!

This first book includes 8 episodes :
• RETRO COSMOS
• THE TWISTED HEIST
• INELUCTABLE DUEL
• THE MELLIFLIOUS CAVERNS
• LORD OF THE TANKS
• HONOR AMONG THIEVES
• LITTLE MUTANT ON THE PRAIRIE
• THE RED FORTRESS
And a special episode: BEFORE THE STORM

A Honeybun and Coffee: Romantic Suspense with a Taste of Mystery