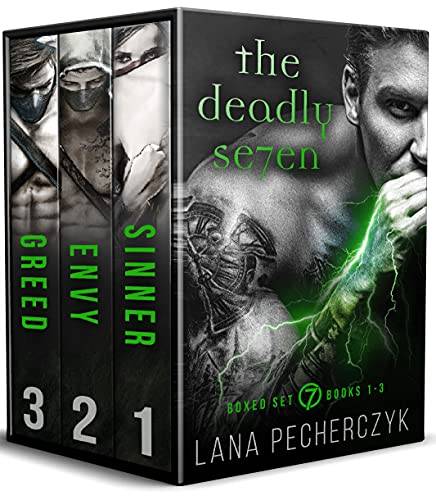 Crime rages in Cardinal City. The fanatical Syndicate’s answer is to be judge, jury and executioner, even if that means destroying half the world to eradicate sin. The only thing standing in their way is a family of genetically modified vigilantes known as the Deadly Seven. Damaged, ruthless, and fiercly protective, each of the Seven must find a mate who embodies their sin's opposing virtue, or risk becoming the very evil they're destined to destroy.
Enter the Deadlyverse with this multi-award nominated series starting with Sinner, Envy, and Greed. Read free in kindle unlimited.
♥ Winner of the 2020 RWA Prism Award for Best Novella. ♥ Finalist in the ARRA Award for Best Ongoing Paranormal Romance Series. ♥ Each book can be read as a standalone, but is best read in order to appreciate the overarching plot.
Sinner: OriginsBefore the Deadly Seven were waging a war on crime, they were children born in a lab with no one to look out for them… except a deadly assassin pretending to be a nun and a tortured man running from his past.
EnvyDisgraced hero Evan Lazarus punishes himself in the underground cage fighting scene. He blames himself for the tragedy that tore his family apart and left the city without its saviors. Traveling a dark path toward vengeance, if he’s not careful, he’ll become the evil he was created to fight. And then he meets her—a woman who embodies his sin’s opposing virtue. She’s smart, relentless, and electrifying… She’s everything he secretly craves.
GreedGriffin Lazarus’ restraint is notorious within his heroic family. His mastery over the sin of greed is second to none. What they don’t know, is a shameful secret drives his discipline and one slip could mean fatal consequences for anyone close to him. When he’s forced to work with a beautiful, feisty reporter poking around his personal life, his control swiftly unravels. Everything about her throws his beliefs into chaos. She’s arousing, loud and infuriating, and craving her could be his undoing—or his redemption.
If you like your superhero movies and TV shows, and your band of warriors and fated mates paranormal romance books, then you'll fall head over heels with the tortured heroes and strong women of The Deadly Seven. Each book in the series features a separate romance with a satisfying complete hea, steamy romance, action, and an overarching plot.
The Deadly Seven Series

Amazon Reviews★★★★★
"I loved this book so much that it has given me a serious book hangover."

★★★★★
"This series is awesome. It has science fiction, fantasy, romance, action, mystery, you name it."

★★★★★
"I can’t wait to find out which brother is next. I highly recommend this book and this series."

★★★★★
"Saying epic is just not doing this series justice! Action packed, this well written storyline kept me at the edge of my seat flipping pages endlessly."

Ladakh: A Piece of Broken Moon Land: The Photography Book

A Rogue to Remember