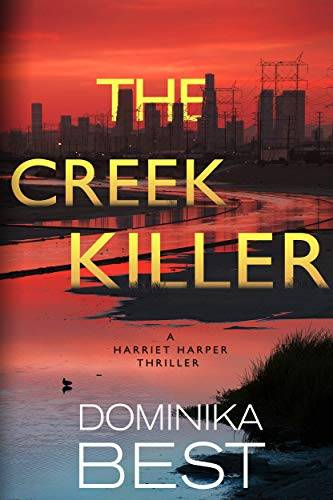 The police found my body buried by the creek. They used my old name. The name I shed when I was 8. I've been on the run since.
"This book isn’t a page turner, it’s a page burner. I turned the pages so rapidly that the pages would probably caught on fire if it had been a real book and not an eBook." - ★★★★★What would you do if you read your body had been discovered in a mass grave? How would you prove you weren’t dead?

Jane Smith has been running from danger her whole life. That danger followed her everywhere, leaving a trail of death in its wake. When the mummified bodies of six girls are discovered in the wetlands of Los Angeles, Jane is surprised to learn one of the dead girls bears her name—the name she abandoned twenty-five years ago to go into hiding.

Detective Harriet Harper gets pulled into a case to make or break her career…if it doesn’t end her life. When the burial site of six mummified girls is discovered, Harri joins the task force created to bring justice for the dead girls. Forces outside her control threaten her reputation and her coveted position on the team as the killer sets his sights on her, taunting her to come and find him.

When a witness comes forward with details that take Harri in new directions, she finds herself moving ever closer to the dark center of a decades-old secret, one that many people would prefer to stay hidden. With her career in the balance and her life on the line, Harri forges ahead to bring a serial killer to justice before he kills again.Read what everyone is saying about The Creek Killer:"Gripping not quite a strong enough adjective to describe this novel." - Goodreads reviewer"Jamming good mystery murder thriller!" - Goodreads reviewer"Had plenty of twists and turns and kinda took you thought more of the nitty gritty of figuring out the killers" - Amazon Reviewer"I wasn’t expecting the roller-coaster thrill ride of my life" - Amazon Reviewer"The storyline had many twists and turns to keep you involved in trying to solve the murders." - Amazon Reviewer"One of the most intriguing mystery I've had the pleasure to read. A new and exciting story. Very detailed and well written." - Amazon Reviewer"Detective Harri is the real deal, and her own demons make for a really interesting story while she tries to solve the case!" - Amazon Reviewer"I turned the pages so rapidly that the pages would probably caught on fire if it had been a real book and not an eBook." - Goodreads reviewer"The story kept moving forward at a good pace and was interesting characters, never boring." - Amazon Reviewer"Characters are well thought out and interesting." - Amazon Reviewer"It kept my attention late into the night! Lots of twists and turns, too. The characters are believable and it really keeps moving." - Amazon Reviewer"An interesting book that holds the readers attention. A book about betrayal, greed, and murder." - Amazon Reviewer“This book was captivating from the start. The main characters were exceptional.” - Amazon ReviewerThe Creek Killer is perfect for fans of Michael Connelly, Gregg Olsen, Lisa Gardner, Robert Dugoni, Kendra Elliot, and Mary Burton. PUBLISHERS NOTE: Each book in the Harriet Harper series can be read as a standalone murder mystery.
Crime Thrillers Women Sleuths Action Thriller Fiction

I've never read anything by her and I read TONS. This was my first one and I have to say I really enjoyed it. Only thing that drove me a little crazy was that it seemed like almost every new chapter started with "Detective Harri Harper....." Once I noticed that, I couldn't stop noticing it lol. Other than that, it was a very easy read and exciting and twisty all the way through. I enjoyed it so much, I just purchased the second book in the series and am looking forward to starting it. Exciting to find a new author to burn through.

Not your standard missing person case

Excellent. This book kept me guessing and had so many twists and turns. Solid characters and a good storyline. Highly recommend. Looking forward to the next book by this author.

Plot was interesting throughout...Memorable characters. I rarely give 5 stAr but this was close. I will read the whole series.

A nice day story but no mystery

I enjoyed reading this story but most of the unknown seemed to be very predictable. The plot was compelling and the characters were great. It just seemed to lack a little substance. Definitely not a real surprise ending.

I couldn’t put this book down! You kind of get an idea of who the culprits are early on, but the book is so fast paced that you have to see how everything fits together and ends. This was an excellent thriller. I’m off to read the next book in the series!

As good as it gets.

One of the best books I have read lately. The plot was great. Very interesting characters. I would recommend to anyone that loves to read a mystery.

It was crazy how Lindsey’s family faked their deaths and got away with it !! I had a feeling about how the killings went down.I just didn’t think Danny would have killed his father…SO glad Lindsey survived…and that Harri didn’t let anyone slow her down!

Love Me in Paris: A Travel Romance