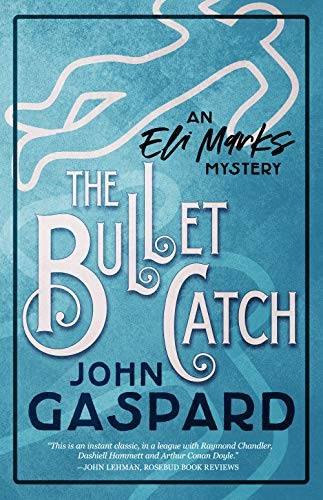 WONDERFULLY ENGAGING, DELIGHTFULLY TRICKY…“This is an instant classic, in a league with Raymond Chandler, Dashiell Hammett and Arthur Conan Doyle.” – John Lehman, Rosebud Book ReviewsNewly-single magician Eli Marks reluctantly attends his high school reunion against his better judgment, only to become entangled in two deadly encounters with his former classmates. The first is the fatal mugging of an old crush’s husband, followed by the suspicious deaths of the victim’s business associates.At the same time, Eli also comes to the aid of a classmate-turned-movie-star who fears that attempting The Bullet Catch in an upcoming movie may be his last performance. As the bodies begin to pile up, Eli comes to the realization that juggling these murderous situations -- while saving his own neck -- may be the greatest trick he’s ever performed.Praise for THE BULLET CATCH:“The Bullet Catch is a wonderfully engaging, delightfully tricky bit of mystery. Fans of magic will delight in John Gaspard’s artful use of the world of magicians, onstage and offstage. It’s a great story and great fun!” – Jim Steinmeyer, Author of Hiding the Elephant: How Magicians Invented the Impossible and Learned to Disappear“Gaspard's latest Eli Marks mystery, The Bullet Catch, has as many tricks up its sleeve as its likeable magician-hero. As the body count rises, so does the reading pleasure.” – Dennis Palumbo, Author of the Daniel Rinaldi Mystery Series and Co-Writer of My Favorite Year“The Bullet Catch is a real winner of magical proportions. Filled with snappy, delightful dialogue and plenty of sleight-of-hand humor, Gaspard's latest mystery in the Eli Marks series does not disappoint. Head to the bookstore and get yourself a copy now!” – Jessie Chandler, Author of the Award-Winning Shay O’Hanlon Series“The author does a fantastic job juggling the separate plots and keeping readers’ minds thoroughly engaged…The relationships between Eli and his remarried ex are interesting, to say the least, and the pure entertainment of the industry will leave all readers hoping that there will be a ‘number three’ very soon.” – Suspense Magazine“The Bullet Catch has a quick pace and dialogue that engages the reader from the first page…Gaspard has written a great character into an original storyline…I will definitely be seeing/reading more of Eli as Gaspard expands this promising mystery series.” – Examiner.com“Readers, get ready for your mind to expand as Eli Marks returns and uses his powers of prestidigitation, intuition and deduction to solve another mystery. If David Copperfield and Sherlock Holmes had a child, it would be Eli Marks.” – Scott Wells, The Magic Word Podcast★★★★★Books in the Eli Marks Mystery Series:THE AMBITIOUS CARD (#1)
THE BULLET CATCH (#2)
THE MISER'S DREAM (#3)
THE LINKING RINGS (#4)
THE FLOATING LIGHT BULB (#5)
THE ZOMBIE BALL (#6)
THE MAGIC SQUARE (#7)
THE INVISIBLE ASSISTANT (Short Story)
THE LAST CUSTOMER (Short Story)
Crime Thrillers Mystery Action Fiction Suspense

Maybe I've read to much lately. But I love a good mystery when I'm falling asleep at night. This did not do it. Just a little to much for me. Rather hokey.

John Gaspard has a well written story of friendships and murder. The characters, the backstory of magicians' tricks, treachery and betrayal all blend together to make this a very interesting and satisfying mystery. I feel as if John Gaspard did a "slight of pen" in pulling off a mystery that both surprised and delighted me. Great Job!

High School reunions are to be dreaded but despite that, Magician Eli decides to attend. There he has to confront his paralyzing fear of heights as well as running into schoolmates he barely remembers. But he does remember Jake who is now a B-list actor who is working on a low-budget movie about the Famous Bullet catch, which killed magician Terry Alexander. Because Jake really could use some help in playing the deceased magician, he gets Eli on the set to help.

Along the way, one of the classmates gets killed causing nosy Eli to wonder why.

A really solid story with wonderful characters and situations. I totally plan on reading the series.

A most excellent sequel - as good, if not better, than the first. So, if you liked that, you'll love this. If you haven't read that one yet, you'll probably be okay reading this alone, but reading that one first will give you a richer experience. Awesome books.

Another excellent episode for Eli!

Love this series. As an amateur magician, I enjoy reading about classic magic and magicians. Plus I love how he keeps running into his ex wife. Hilarious!

Predictable for those who enjoy classic movies, but very fun to read anyway

The discovery of the Eli Marks mysteries was a happy accident that I have truly appreciated. This is the second book in the series. I enjoyed the entire story, regardless of the fact that I could see the answer to the mystery so easily. After all, John Gaspard throws the answer at the reader with references to classic movies that suggest exactly what is going on. Despite that, I thought this was a great read and I have gone on to read all the Eli Marks mysteries and look forward to any new ones on the future.

Rescued by a Rogue

A Study in Seduction