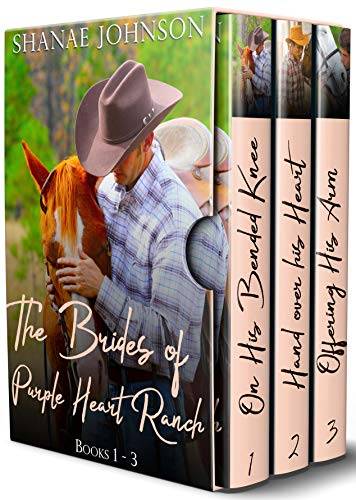 Three SWEET Marriage of Convenience Western Romances in ONE Boxset!

If you believe in heroes…

Then you’ll love these light-hearted, clean and wholesome romances of convenient arrangements that unfold into lasting love. The Brides of Purple Heart Ranch series features Wounded Warriors, the women they fall for, and the loyalest pack of dogs you’ll ever meet!

ON HIS BENDED KNEE
Sgt. Dylan Banks lost more than just his leg in the war. His fiancée and family turned their backs on him as well. Now, he’s determined to create a safe place where wounded warriors like himself can heal. But a hidden zoning law requires all residents of the Purple Heart Ranch to be married. To save his dream, Dylan and his men will have to tie the knot—but can a man with such deep scars inside and out believe in love again?

Maggie Shaw lost both her job as a veterinary technician and her apartment on the same day. Who knew her unreasonable landlord would kick her out for being four dogs over the one pet limit? Now, she and her gang of special-needs dogs are in trouble. Fate puts her in Dylan’s path with a proposal that seems too good to be true—but can her heart bear a loveless marriage of convenience?

Dylan yearns to reach out for Maggie’s healing touch, but he keeps his distance, convinced his wounds are too deep for her embrace. Maggie sees past Dylan’s injuries, but if she fails to capture his heart they both could lose it all: her beloved animals, his ranch, and each other.

HAND OVER HIS HEART
Francisco DeMonti has always been a man with a plan. Though his last plan led to his entire squad being wounded on a mission in Afghanistan. Now he’s seeking redemption by getting all the men in his unit hitched so they can stay together and heal. But his own heart is under lock and key due to the shrapnel around it that could kill him at any moment.

After years of scraping and saving, Eva Lopez finally steps foot onto a college campus only to be yanked away by the mean streets she came from. A local gang threatens her family’s safety until a wounded veteran offers a reprieve: marry a soldier in exchange for protection and the freedom to attend school.

Fran has every intention of directing Eva towards one of his brothers in arms, men who aren’t in danger of a sudden death, but he can’t resist the brainy brunette and proposes to her himself. He’ll protect her for as long as he breathes, but falling in love is futile for a man with a ticking time bomb in his chest. Eva can’t help falling for the man who is making her dreams come true, but when he keeps her at arm’s length, can she convince him to make this marriage more than a convenience no matter how much or how little time they have left?

OFFERING HIS ARM
Reed Cannon may be a numbers guy but being minus one arm due to enemy fire hasn’t slowed him down. Now he’s faced with a new challenge—find a bride so he can stay on the rehabilitation ranch that has given him and his squad back their lives. Reed turns to a dating app to narrow down the selection of potential brides. The woman who matches him nearly 100% is accessible online, but out of reach in reality.

Sarai Austin has done the impossible, she’s found a great guy online. The problem is now he wants to meet in person, and Sarai's not ready for IRL. Her profile picture was taken three years and thirty pounds ago. To hide her weight issues, she tells Reed she’s out of town on business. All she needs is a couple of months to lose the weight and get back down to model-size. What she doesn’t count on is running into Reed in town.

After meeting in person, Reed knows Sarai is the one. But as the two grow closer, their insecurities get in the way. Reed isn’t sure he’s enough for her. Sarai is certain she’s too much for him. When the lies and doubts come to a head, will their relationship be over before it has a chance to begin?