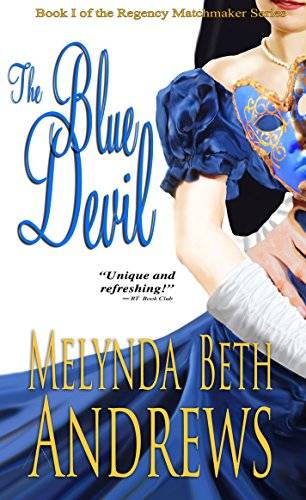 A historical meleé of masquerades, mistaken identities, chase scenes, spies, and dotty (or are they?) old ladies. Nominated for a Golden Heart Award by the Romance Writers of America, this is Regency romance at its best! You can read the entire second book in the series right now at MelyndaAndrews.com .

The Blue Devil is a dashing, brooding spy set to catch a traitor who uses a finishing school for young ladies as a base of operations. But he's having trouble keeping his mind on his mission, for one of the students reminds him too much of the mysterious Titania, a fairy queen who fled after they kissed at a glittering masquerade ball.

Kathryn St. David is pretending to be a student at the school in order to recover her dear auntie's lost diary, which contains a scandalous secret that could ruin them both. But she's horrified to discover that her roommate is the ward of the notorious, darkly attractive Marquis of Blackshire--who seems to be keeping secrets of his own. Will he recognize her as the fairy queen and expose her as the lady who kissed him like a strumpet in the moonlight?

This historical romance is the Book One of Melynda Beth Andrews' Regency Matchmaker Series.  It is a traditional, sweet Regency romance, originally print-published by Kensington Books as part of its Zebra Regency line.

You can read the entire second book in the series right now at the author's website:

While you're there, be sure to sign up for her newsletter, THE FURTHER ADVENTURES, to be notified of special, subscriber-only deals. Subscribers receive advance notification when new books in this series are released, so you won't miss a thing. THE FURTHER ADVENTURES also contains short stories featuring readers' favorite characters from Melynda Andrews' Regency Matchmaker Series.

The The Kindle version of this book was expanded and revised in September of 2017. If you have an older Kindle version, it's easy to update to the latest version right now. To do that:

Hot on the Trail Mix

A Life for a Life: A Mystery Novel