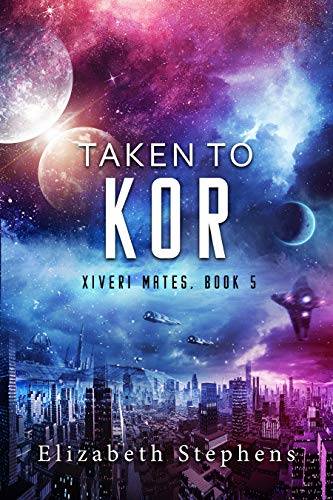 Deena
Rhork. He's a space pirate. The bad kind. But he's also been my only source of company for the past rotation that I've been held captive.

Halfway across the galaxy, I'm happy to have finally escaped and found more humans...well, I was.

But now, I'm not so sure that people are so much better than pirates. And I'm very sure that I'll need Rhork's help to get out of this. But Rhork thinks I'm a defective female because of my twisted leg. What if he's not willing to give it?

Rhork
Communicating with the human female for almost a rotation was, in retrospect, a poor choice. Now, she seems to be the ever-present voice in my head, distracting me, making me want things I shouldn't.

To make her a pirate.

To show her the universe.

And most of all, to keep her for myself.

Taken to Kor is a full-length (95k words), adrenaline-filled, SciFi space opera romance featuring an alien pirate who looks like an alien and a plus sized heroine with drive and heart. Enemies-to-lovers who are also fated-mates are common staples of all Xiveri Mates books, which each end with their own special HEA. While this book can stand alone, I recommend reading this book after book 4.
Space Opera Science Fiction Science Fiction Romance

Both a little crazy,

Exciting, thrilling and funny.
A wonderful story of hope and challenges and overcoming ones doubts. Must read and get the next book. This is a wonderful imagination this author has. Love the way she writes.

I voluntarily reviewed this after receiving a free copy.
Elizabeth Stephens has created a world (many worlds), filled with different species, her own languages, and I'm just overjoyed that she put ink-to-paper to share it all with her readers. I have read every Xiveri Mates book (aside from the standalones-- which I need to rectify soon) and each tale is as unique as her characters. I always thought that a good author could take a (perceived) villain and make them likeable without shoving some redeeming catalyst down your throat. Well, Rhork was treated well by this author. And Deena finds the family she deserves. Another great read in this series.
And I was in stitches during the scene where it's basically the equivalence of a reunion FaceTime!
Action. Humor. Guaranteed HEA.

Despite being a short read, I loved it. I was rooting for Deena the entire time. She is definitely a warrior...I mean pirate.

I just love this series! This book has lots of action and some pretty funny moments. Deena is a little broken by everything that's happened to her in her life but she's a survivor and she puts up a hell of a fight.

When Alexa inform me that Ms Elizabeth had a new book available for purchase I couldn't say yes fast enough. I absolutely love this series. If you love sci fi, alpha males, and a strong fierce leading lady this series is for you. I won't waste your time by giving you a synopsis of the book just read it. It's good.

I love this series. I can’t wait to see what is up next. I will anxiously waiting for the next in the series.

I loved Deena and Rhork....this was such a great story! I loved reading about their love story and the babies at the end

Rise of the Valiant

My Twist of Fortune (The Greene Family)

Face of a Bigamist