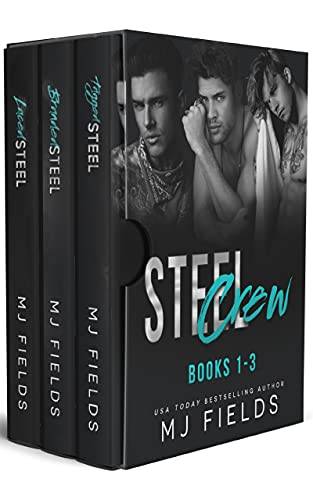 The first three stand alone novels in the Steel Crew series are now available in a box set
TAGGED STEEL
The night before college graduation, was one for the books.
Deciding to memorialize our last night together, my roommates and I ended up in front of a tattoo shop. They chickened out. I didn’t.
Lying face down, ass up, and alone on the table of the tattooed, god of a man, whose sinfully sexy style, and delicious demeanor wasn’t part of the plan.
It was one night, no regrets, no looking back, until I finally got a good look at the art he tagged me with.
Tag, I’m it.
BRANDED STEEL
He can sing, dance, and owns whatever stage he’s "performing" on.
His looks make him a triple threat. And he’s gone viral.
He is the Country Music Artist of the Year.
Which means that face, those eyes, that hair, that body, and his voice are every-freaking-where.
He’s America’s newest country sensation, and he can do no wrong.
Except, he did.He totally did.
And he did it to me.
LACED STEEL
I traded my plaid skirt for a navy blazer, my religion for a red Solo cup, and finally my Bible for a bong, just to fit in.
He helped me jeté from outcast to the "it girl."
In becoming this new, improved version of myself, my truths became laced with lies.
I thought he was my savior, but it turns out that he was really the devil in designer.