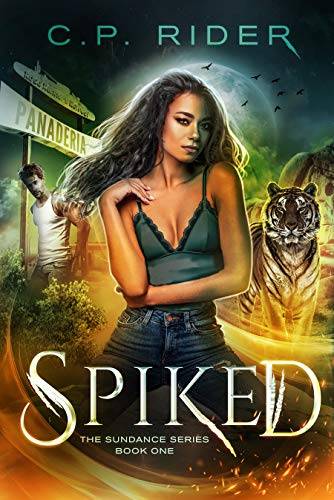 A telepath with a lethal twist.
My name is Neely and I'm a telepath-spiker. Not only can I read a person's thoughts, I can also spike deadly power straight into their brain.
But don't worry, I have strict rules about that sort of thing.I'm hiding again. This time in a California desert truck stop town run by Lucas Blacke, a tiger shifter and alpha leader who's as handsome as Lucifer and twice as slippery. I've been running from alphas like him my whole life. They either want to own me or kill me—there is no middle ground.Now a homicidal alpha from my past is threatening everything I care about and I know I can't fight him alone. Lucas Blacke is dangerous, and his intentions are murky at best, but I've run out of options. If I want to live, I'm going to have to put my faith in a man I know I can't trust.If you like urban fantasy with a side order of romance, fast-paced action and slow-burn love, pick up your copy of SPIKED today!

Entertaining romance and out of the ordinary shifter story!

Spiked was a very enjoyable romance plus an unusual spin on shifters and on other types of paranormals. Neely was very unique. It was enjoyable reading about her life and the unusual situations she had to overcome. Lucas Blacke was beyond unusual for a shifter! Neely and Lucas had an uphill climb to reach the point where they could finally admit to liking one another as well as being able to work together! I look forward to reading the next book in the series and recommend this book highly!

Very fun book, not spectacularly original, but a very enjoyable read. Also very refreshing to see characters of many different races and sexualities without it having to be the center of their identity

This booked had me from the start. I couldn’t put it down. I finish reading it in one day. Can’t wait to start the second book.

Great read, loved the characters and the pace of the book. Looking forward to reading number 2 in the series.

This was a good story even though the writing style was a bit jumpy. The dialogue at times was a bit obtuse. I liked the characters but Lucas could be a bit pushy at times and when he demanded to know Nelly’s secret, even though she wasn’t in his group I felt he was a bit overpowering. There were some things that didn’t make sense like the fact that they knew betas were the target of the serial killer, why weren’t they protected more? The witches were ridiculous characters and were silly. Were they even necessary? To sum it up, there were a few problems with the story but overall the plot was good.

Completely unbelievable BUT you do

This is my first with is author: it won’t be the last. The character attributes are a little different than most. The characters personalities are very well written and stay true even as they are unfurled. Even at the end when your brain says no way, your story heart says it’s okay- it works.

My main thing is that I have really no positive feelings about the main character. She's...a mess. Selfish. Unwilling, or unable to deal with reality. I just dislike her. Hugely annoying.
And that completely tossed the book.
Which is sad because it's sort of interesting in a way. It seemed incomplete but that could just be my general level of irritation coloring things.

I think the world and characters the author has created are really interesting! I can’t wait to see what happens next!!

A mixed bag of shifters, empathy, telepaths and witches. A heroine on the run. Loved all the food references, made me wish I was home.