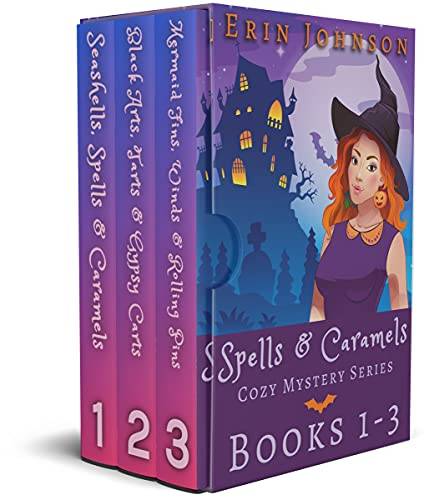 There's murder on the menu, and magic in the air. Read books one through three in the charming Spells & Caramels paranormal cozy series today!A magical French island. A dead contestant. An aspiring baker must clear her name before she gets burned. Imogen Banks has dreamed her entire life of opening her own bakery in Seattle. But when she accidentally sets fire to her apartment and loses all her possessions, her dreams get toasted. Still coping with her loss, she receives a cryptic invitation she can't possibly refuse: entry into a mysterious baking competition on a beautiful French island. When Imogen realizes the island village is magical and the bake-off’s participants are witches and wizards, she’s not sure her fledgling powers will be enough to win the coveted contest. In the midst of trying to cast her very first spell, a competitor drops dead and Imogen finds the psychic judges' mystical fingers all pointing at her. Can Imogen unlock her own magic and stop the killer from coming back for seconds or will she jump straight from the frying pan and into the fire? Seashells, Spells & Caramels is the first book in a charming paranormal cozy mystery series. If you like hilarious heroines, mysterious magical communities, and quirky conspiracies, then you’ll love Erin Johnson’s perfectly witchy recipe.
Buy The Spells & Caramels Boxset Books 1-3 to dive into three cozy paranormal mysteries today!

"I enjoyed reading these stories so much I read the entire 3 stories in one day!" ★★★★★ -SJA, Amazon Reviewer

I love this series. If you've not read any books you this author, you're in for a treat. Especially if you like paranormal cozy mysteries.

I thoroughly love this series. I have read and listened on audio. The audio version just ads tremendously to the visualization.
Seashells, Spells & Caramel

The author describes the setting and you are transported to a scene off the coast of France.
I enjoyed that it was a clean cozy- no really violent scenes, some romance, and the Harry Potter feel to it. Imogen is 29 and saving for a bakery. Her boss has a wedding coming up and the baker has backed out at the last minute. Imogen steps forward to help out. This act changes her life.

Imogen was adopted and raised in Seattle. The day after her big delivery of baked goods, she enters a baking contest off the coast of France, her apartment building burns, she must pay all of her savings to the insurance company. She finds the check for the catering event in her apron pocket and is on her way to the finals. She learns she has magical powers but does not know how to use it. Throughout the contest, she must of sort her way through the magical world.

There is a death of a baker and there are plenty of suspects.

Black Arts, Tarts & Gypsy Carts
Imogen has a lot to sort through. She recently found out that she has magical powers but doesn’t know how to harness those powers and use them properly. She is in a land that has normal human tourists but is filled with various magical people and beings.

Imogen tries to distance herself from Prince Harry. She volunteers to run the royal bakery booth at the summer sea carnival on Bijou Mer where there will be unmagical humans visiting during the day.

She meets another Swallow, magical person that draws their powers from the energy of others & objects. So, Strongman Ed, Hank and her are the only Swallows we know of so far. Being a Swallow is not to be broadcasted. Swallows are normally distrusted and ostracized. They best way to learn to control/use your magic is to learn from another Swallow. Therefore, Imogen gets some lessons from Strongman Ed.

These answers are revealed in this wonderful tale.

The narrator/reader Hannah Somerville brings this to life. I love the sound effects & different voices and accents. She enhances the author’s work.

The gang from the Water Kingdom (Maple, Imogen, Iggy & et al. travels to the Mermaid Kingdom to make the pastries and such for the wedding of the Mermaid Queen (Winnie) to the Pirate King (Chuck). To do this, Imogen Banks and the others have to transform into merpeople to be able to get around their world since most of it is under water. It is a new twist for Imogen, as she is still getting used to having magical powers. While there a mermaid, Bubbles – the queen’s BFF, is murdered and Imogen becomes embroiled in solving the crime.

I did not know who killed Bubbles until it was revealed.

There are some interesting twists and turns in this installment. We learn more about Maple, Wiley and a few others. I found it interesting the twists in Imogen and Hank's attraction to each other. I’m not sure I like the way Imogen & Hank settle their attraction to each other. I know the arranged marriage is political but I am torn but can understand.

Imogen talks to her adoptive mother, Nancy. We learn a lot but I won’t spoil it, here.

First 3 books in the series are great!

Book 1:
I enjoyed this first book in this cozy mystery series and found the setting and characters to be similar in some aspects but yet completely different in others. There isn't a lot of character development but I'm sure that will come with time in the series. The world building is interesting and I found myself completely engaged in the story. The book was fast paced and easy to follow.

There were some twists and turns as everyone wondered who was going to win the contest, especially after a contestant died and his death ruled murder. There is a, possibly forbidden, love interest that I hope the author explores a lot more in the next book. I like the premise of the potential love story.

Book 2:
Imogen is a fun, caring, and interesting character. She has embraced the magic she was born into even if she still doesn't truly know how to harness or use the magic. Maple is having a rough time fitting into the role of head baker and she has some pretty insubordinate assistants. Imogene is a wonderful friend to Maple as she desperately attempts to make her way. I love the dynamics between Imogene and Prince Harry. They are cute together. And Iggy is the best! He's mouthy but after the misunderstandings in the beginning of book 1, Iggy and Imogen have a great relationship.

I enjoyed the second book in this cozy mystery series and found the setting and characters to be interesting, and at times, exciting. There is more character development in this book than in the first one and I enjoyed getting to know everyone better. The world building is interesting and I found myself completely engaged in the story. There were some twists and turns in the quest to catch the killer. There are multiple threads woven through Black Arts, Tarts, and Gypsy Carts and I was surprised by a couple of them. The book was fast paced and easy to follow. I love the potential love story and hope we get to see it grow in the upcoming books.

Book 3:
Mermaid Fins, Winds & Rolling Pins has really interesting plot points that kept me engaged in the story - from the talk Imogen has with Princess Shaday before leaving for the Mermaid Kingdom, to the method of sending humans and other 2 legged air breathing creatures to the depths of the sea to hobnob with merfolk. The development of the mystery was steady and unfolded smoothly. The true culprit was masked well and hidden among all of the suspects without providing any clues to heighten the reader's awareness of who was actually to blame.

Imogen is a fun, caring, and interesting character. She has embraced the magic she was born into and she's continually trying to harness and use the magic. Her skills are much better in Mermaid Fins, Winds & Rolling Pins. I'm intrigued by her past, which we do learn more about in this installment of the series. Maple is acclimating to the role of head baker much better and is working out ways to straighten up the problem assistants. Imogene and Maple are wonderful and I love their friendship. I love the dynamics between Imogene and Prince Harry. They are cute together and things really heat up in this installment. Iggy the flame is the best! He's mouthy but Iggy and Imogen have a great relationship. He is able to travel to the underwater kingdom, as well, and provides some of the best comic relief, even if he doesn't necessarily mean to.

I was provided a copy of this book to read.

It has been a while since I read this series but I loved it. I was really disappointed when there were no more books. I have been reading cozy mysteries for a few years and just recently got into paranormal cozies and they are a lot of fun. Erin is a great author with a lot of good ideas and I love her characters.

a must read series

as yummy as the title!
original approach to a world of magic. characters have depth of character. suspense and mystery drizzled with romance...nothing graphic, thank you. a great read. gotta love iggy. new to the world of magic, experienced in the world of baking,Imogene solves another murder with the help of her wonderful friends and a snarky Iggy. a truly one of a kind story line,

The characters continue to be the best part of this series; I like the way normal human challenges like being attracted to two people at once are presented honestly, without offering an easy answer. I liked the casual acceptance of gilt (with acknowledgement that it can be problematic), as well as the humor that love isn't only for the young and pretty. The plot points that will tie the series together seem to advance painfully slowly . I expect all will be revealed eventually. How long can the star crossed lovers be tortured by the author?

I enjoyed the world the author created and the main character. As is not to like about a witch baker and a lot of mystery.

The Clash of Yesterday: A Chronicles of the Stone Veil Novella