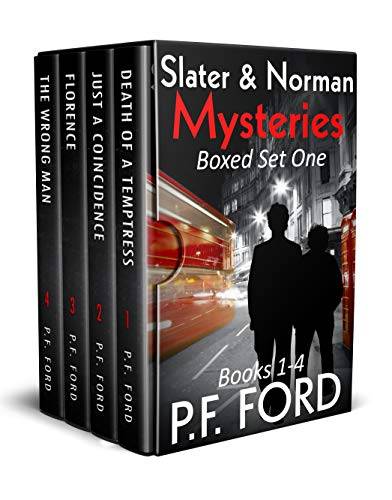 "If you like good old-fashioned storytelling, meet Dave Slater and sidekick Norman Norman, two wonderfully, humanly, flawed characters who will soon feel like old friends.”This boxed set comprises the first four books in the series, including:DEATH OF A TEMPTRESSOne missing woman.Two scapegoats looking to put the record straight.Ruth Thornhill went missing six months ago, but when asked to investigate Dave Slater soon finds enough discrepancies between the original case file and the facts to realise there’s been a cover-up. Curiosity aroused, he begins to ask questions and rattle some cages. When someone tries to push him under a London bus, Slater knows he’s onto something big, but now the stakes have been raised his boss insists he needs help.Slater is horrified to find his partner is new to the station and rumoured to be as good as useless, but his boss insists, he has no choice. It turns out new partner DS Norman Norman isn’t quite as hopeless as rumour suggests and, just like Slater, has also crossed paths with the Serious Crime Unit.The stakes get higher still when they uncover some disturbing connections to the missing woman. These include a Chinese businessman, an online escort agency, a top London banker and, most dangerous of all, senior officers from the Serious Crime Unit.Can the new partners uncover the full story, or is this going to be the first and the last case they work together?JUST A COINCIDENCEHow can a body appear in the middle of a patch of long grass without leaving tracks?
It couldn’t just drop from the sky, could it?
As they begin examining the scene a dog arrives carrying a stick. Or, maybe it isn’t a stick. In fact, now he can see it properly, Slater recognises it as a bone, and he’s pretty sure it’s human….Finding more than one body near a quiet English woodland would seem to be quite a coincidence, but with years between their deaths it can’t be.Or, can it?FLORENCEWhat if you had a guilty secret you’d rather no-one else knew?How bad would it have to be for you to commit murder to keep it quiet?A little old man has been found dead in his home. It’s sad, but these things happen all the time. Dave Slater takes a look but sees nothing suspicious to report. Then the old man’s house is ransacked. Of course, it could be an opportunist burglar, but Slater gets the feeling someone is looking for something specific.Maybe he was wrong about the old man’s death, but what secret did he know that would cost his life?Slater & Norman feel the answer must be in the past, but how far back do you have to go to find it?THE WRONG MANWho is most likely to kill a woman?Statistics say it’s more likely to be someone they know, not a stranger.Fingers are soon pointing at murdered Diana Woods’ ex-husband, Ian, who appears to be everyone’s prime suspect. But Dave Slater has his doubts. What people have been led to think they know and what they actually know aren’t always the same thing.It’s becoming clear Diana was very believable, but was she as squeaky clean as everyone suggests, or was she hiding something?New evidence leads to a new suspect, but everything seems to be just a bit too obvious. Something doesn’t add up.
If only Slater could put his finger on it.
The Slater & Norman Mystery series is a blend of character, suspense and humour, that never takes itself too seriously.
Traditional Detective Mysteries Women's Crime Fiction Mystery Anthologies

Deal with the Devil

Coming Home to You: A Small Town Second Chance Romance