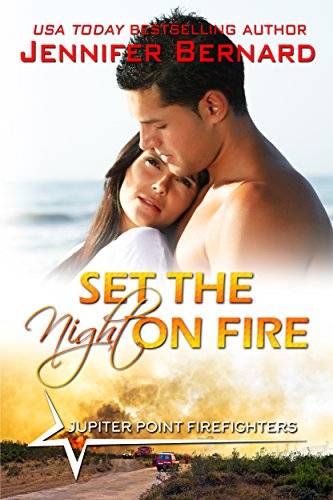 USA Today bestselling author Jennifer Bernard is hotter than ever with a sexy new series about the wildfire fighters of Jupiter Point.
The town bad boy is back to clear his name
Firefighter Sean Marcus left Jupiter Point thirteen years ago in disgrace, but now he’s coming home to set the record straight. As the leader of the new Jupiter Point Hotshots wildfire crew, he’s out to prove he’s no longer the troubled boy who fled after a night of shocking violence. He’s returned for one reason only--and it’s not to fall in love. But that plan goes up in smoke the minute he sets eyes on Evie McGraw, all grown up and gorgeous.  The town sweetheart has a secret
Evie has never spoken about the night that changed her life. But she can’t escape it, especially now that her brother’s wild friend Sean is back. Rugged, sexy and impossible to ignore, he’s the only one who knows what truly happened. Evie gave up everything to protect her family, but now, she has to make a choice. Keep silent…or put her heart on the line and let Sean help heal the past?

More from Jupiter Point: The Jupiter Point Hotshots Box Set (containing Books 1-3) is on sale for a limited time.

Blind Date with my Billionaire Boss