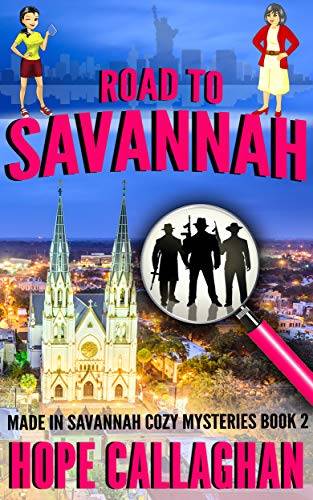 Imagine if the Sopranos moved to the South and became amateur sleuths…Meet the Garlucci family!

After the mysterious death of her mafia “made man” husband, Carlita Garlucci makes a shocking discovery. Follow the Garlucci family saga as Carlita and her daughter try to escape their NY mob ties and make a fresh start in Savannah, Georgia. They soon realize you can run but can’t hide from your past.

“If you like clean cozy mysteries that keep you guessing until the end, you’ll love the Made in Savannah Mystery Series!”

The Made in Savannah Mysteries Series contains no profanity, gore, or sex...They're safe for the whole family.

Her daughter, Mercedes, is moving with her and the women are both excited and nervous about this new chapter in their lives, having always lived under the shadow of the men in the family.

The repairs to their inherited properties are moving along nicely and everything seems to be falling into place, everything that is, except for the body they discover inside one of the buildings, the dilapidated restaurant. Despite the fact that the Garlucci family was not even in Savannah at the time the victim was murdered, they can't prove it.

On top of that, the victim, a member of Savannah Architectural Society, also known as "SAS," had been sent to the property to discuss possible construction violations. The other members of SAS are convinced the Garlucci family murdered one of their own while Carlita is convinced that someone is trying to frame them.

Can the mother / daughter duo figure out who the real killer is, or will the police dig into Carlita's past and discover that she has her own share of secrets she's trying desperately to leave behind?