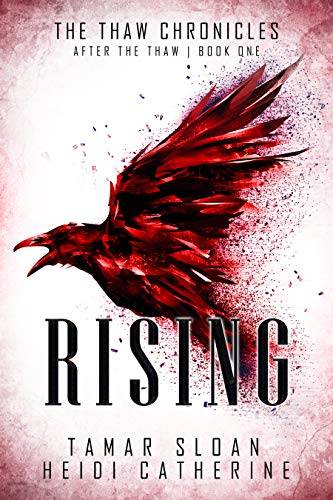 Four tests. Seven days. Nine teens. Only the chosen shall breed.★★★★★ "This is definitely way up there with the Hunger Games and Divergent!"
Humans now live in a super greenhouse. Seas have risen. Oceans have acidified. And the fight for resources is deadly. To ensure nothing of this magnitude ever happens again, only those with enough intelligence and heart will earn the right to bear children and heal the earth. Nine teens must face the tests of the Proving to decide who will be Bound to this new order. Four of them will challenge the system in ways even they can’t imagine.Nova. The gentle soul who has everything to lose.Kian. The champion of this new world who’s determined to succeed. Dex. The one who'll learn nothing is as it seems.Wren. The rebel who wants nothing to do with any of it.As the fight to breed becomes a fight to survive, rules are broken, and hearts are captured. This Proving won’t just decide the future of this new order, it will decide the future of humankind.Lovers of Divergent, The Hunger Games, and The Maze Runner series will be blown away by the breathtaking new series from USA Today best-selling author Tamar Sloan and award-winning author Heidi Catherine. Scroll up and grab your copy now!What readers are saying about After the Thaw...
★★★★★ "Rising is without doubt the best dystopian series I have ever read."
★★★★★ "It's understandable why this is compared to the Hunger Games…the writing is top notch and on the same level as those books."
★★★★★ "Oh my. I couldn't put this book down. I can't wait for more!"
★★★★★ "Great beginning to a new dystopian world! If you love dystopian, futuristic, or climatic fiction you need to start reading this series now!"
★★★★★ "I didn't think it possible for another story to rival the likes of the Hunger Games and Divergent, but if Burning is an indicator, After The Thaw is going to be THE series to slake dystopian fans' thirst."

Poorly thought out and ridiculous

Please make at least a little effort at research. None of the science makes any sense. I almost always can overlook poor science but I almost stopped after the first chapter. I fought my way to the end but will not continue.

This book wasn’t filled with a ton of action, but it does set the stage. And I was NOT expecting things to end the way they did. I’m in slight shock over it!

What a great read. The characters are amazing. The story line fast paced. I am going to download the next book in the series.

Wow, some of these reviews are way harsh so I wanted to leave my support.

I'm an avid reader and YA is my thing. I've read A LOT of books in my day, upwards of 30 a month. And this book is near the top of best things I've read.

I did NOT find it predictable in the slightest. I was regularly surprised by things that happened and by the way characters behaved. And I grew to love every single main character in the story. I laughed with them, cried with them, and was genuinely sad for the book to end.

The characters are deep and interesting. The story is unique and engaging. I rushed to finish it, doing that typical "just one more chapter" until I realized I know had an hour left and stayed up all night to finish it.

I can't wait to finish this series. And I hope anyone reading this will give it a chance instead of considering those few bad reviews. If YA dystopian novels are your thing, you'll be hooked in no time!

I appreciated the plot and the unique take to rotate four characters telling the story. This gave more insight into life in askala. Didn’t like the ending and hope that choice will be explained in book two. My biggest complaint would be that it could stand another edit. There were missing words and typoed words that typically would have had me putting the story down rather than continuing but the plot was enough i wanted to know if everyone passed.

Nine young people face their greatest test, to decide what roles they will play for the rest of their lives. Nothing is ever as simple as it seems. Well-written, I read this book in a sitting and borrowed the next.

This series is SO good.

I love this series! I could not put my book down! If you are looking for something to read This Is It. I am now waiting for the 8th book to come out. And I NEED IT! Lol seriously though I love the characters, I just wanted to know more and more about there stories. I also really like the setting and circumstances that hey are in.

Not action packed, but still enjoyable

This world is fantastic! The four main characters, Dex, Nova, Kian, and Wren, have deep emotional connections and internal struggles that really make you root for each. Dex, in particular, is an underdog you cannot help but love. The desire within each to do their duty and become Bound for the future of mankind is compelling. I didn't once doubt their motivation, even when they sometimes did.

For the most part, this is a fantastic book. But it was not without its pitfalls.

The Proving is not nearly as dangerous or intense as I had hoped for. Don't get me wrong. There are a couple of tests where things get hairy, but I never really feel like their lives are in danger or they might fail their test. Maybe I'm an adrenaline junkie, but the book is not nearly as pulse-pounding as I had hoped. Only once did I worry that one of them might even become hurt or dragged under in the water. A comparison to the Hunger Games might be a little strong. I think it's more like The Hunger Games for middle-grade kids.

I predicted the ending on page 11, which was a huge disappointment. Not that I didn't still enjoy the characters and the story, but I knew how it would end the whole time, and each chapter I read only served to further confirm what I already knew. If the authors wanted it to be a shock at the ending, they were a bit too obvious with the hints they left in the book.

Despite the two major pitfalls, the writing is fantastic and the story is interesting and well worth the read. I would recommend this book. In fact, were it not for those two issues, Rising easily would have been a 5-star book. This book is a fun adventure you will not want to put down, even if it doesn't keep you on the edge of your seat.

I need 20 words to post this, so don't expect any spoilers. I can't express how this book impacted me, and you won't know how it impacts you unless you read it.

What he did to her