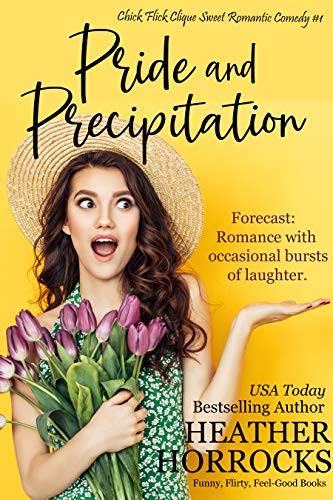 Pride and Precipitation ~ A sweet enemies-to-lovers romantic comedy.
Forecast: Romance with occasional bursts of laughter.
Breezy Jones is crazy about the weather — rain or shine — which makes her job as the local television station’s meteorologist perfect. She’s even hoping the new buyers of her Aspen Grove station will make some positive changes.

That’s before she meets the attractive new general manager, Noah Drake, who is determined to repackage everything — including Breezy’s down-home delivery and casual, girl-next-door appearance that seems too Pollyanna for him. He replaces her with a high-powered diva weathercaster and makes Breezy her off-screen assistant.

With a flood of angry emails from the community, plummeting ratings, and incessant demands from the diva, it doesn’t take long for Noah to see which way the wind is blowing.

She's Having a Baby: The Saints of San Diego