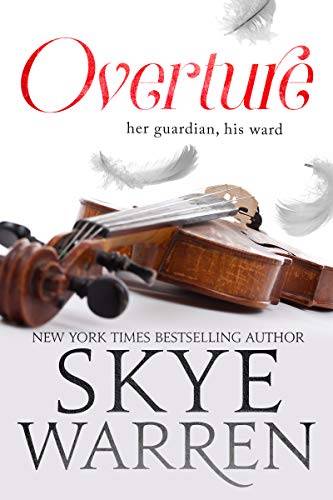 The world knows Samantha Brooks as the violin prodigy. She guards her secret truth—the desire she harbors for her guardian.

Liam North got custody of her six years ago. She’s all grown up now, but he still treats her like a child. No matter how much he wants her.

No matter how bad he aches for one taste.

Her sweet overtures break down the ex-soldier’s defenses, but there’s more at stake than her body. Every touch, every kiss, every night. The closer she gets, the more exposed his darkest secret.

“Overture is a beautiful composition of forbidden love and undeniable desire. Skye has crafted a gripping, sensual, and intense story that left me breathless. Get ready to be hooked!” – USA Today bestselling author Nikki Sloane

WOW this story was awesome, throughout the story had deep memories of a 12 year old girl growing up with a man who owned a Security company. Becoming her family who would take care of her, having her play her violin and going to school until she turned18. She fell in love with him, who took her in and kept her safe and unharmed. Each and every chapter of this story came alive. Three brothers who watched out for her during that time. Man this book was so good it kept me incredibly interested in reading it, can't wait to see what happens in the next book! ENJOY

Forbidden steamy romance with a pinch of action

Audible listen. Narrators did a good job! Liked both the male and female narrators; each fit the characters well and they both have nice sounding voices.

Good chemistry between Liam and Samantha. Like the forbidden aspect, but I would’ve preferred for them to wait till she was 18 before anything romantic happened between them. It’s not the full thing, but too much with someone under age. Liam is Samantha‘s guardian since she was 12 years old; she’s just about to turn 18, he’s in his early 30’s. She is a prodigy with the violin and is about to go on a world tour, and Liam runs a security firm with his brothers. They both feel an intense pull towards each other, but Samantha is the main aggressor; Liam is trying to be a good guy and resist the pull. There’s also some possible danger out to get Samantha; possibly in connection with her father’s death, so there’s a bit of action too. Liam and his team help protect Samantha. This book does end on a cliffhanger, so you’ll be needing to read the next books for the full story. Overall, the story was entertaining for me and I liked the chemistry between Liam and Samantha. I also liked the musical element to the story; the facts at the beginning of each chapter were fun. I look forward to the next books!

It took a while to feel the real attraction between Liam and Samantha but I guess I wasn't expecting it with the presumption that he was her guardian and raised her. There could have been more elaboration or descriptions but it got the point across.

Violin prodigy in danger...guardian assigned to protect her

She has a crush on the man who’s been her guardian for the past six years. He fantasies about her mouth on parts f body. It’s forbidden. It’s inappropriate. It’s taboo. She’s not yet eighteen. He’s sixteen years older than her.
Samantha is a violin prodigy ready to step into the world. She’s obedient, trustworthy and careful. Samantha lives with a group of military soldiers on a compound. The compound known as North Security is located in Kingston, Texas, a small town.
Liam has been protecting Sam from a danger she’s unaware of. He’s an ex military man who owns a security firm. He runs his household the same way he runs his business with a regimented schedule, discipline, and structure.
He has legal custody of her, but she’s never seen him as a father. He’s never seen her as a daughter just someone to protect.
Her father was an Ambassador whose life was cut short. Despite his death her life’s still in danger. Liam’s known her life’s in danger so he requested to become her guardian. With all that said this is only part of the story that fell short. I felt if it had more storyline this could’ve been a suspenseful story.
After reading four books in a row by Skye Warren I’ve come to the conclusion that each book follows a formulaic pattern of being taboo, unconventional, insta-love, forbidden, age gap, and erotic. Here’s another common element her characters have a push n’ pull connecting at one point only to end with a cliffhanger. It’s all too repetitive.
Eventhough the subject matter and storyline are good I still find myself skimming. Nothing sticks or holds my interest. The manner in which Skye executes her story and builds her characters doesn’t attract interest in me. I find her characters are emotionally unattached thus creating an unattached feeling from me.
There was more talking about the taboo nature of the relationship without crossing the line.
Skye’s writing style doesn’t draw out that page turning need in me. Every one of her characters comes across as cold and distant. The attraction felt misguided not taboo. When you factor in her parental loss and abandonment issues it’s easy to decipher where the crush stems from.

This is obviously a far reaching story line, but hey, who wants everyday life all the time? I certainly didn't expect a plot such as this. Great imagination. Just a fun read for enjoyments' sake. Any plot based around music adds a fun twist. I think it would make a fun movie one day.

I absolutely could not stop reading this book. The author does a fantastic job of building up to the “big event”, and of course I had to buy the next book in the series to see how the story continues!! It is sooo good.

It Was Always You